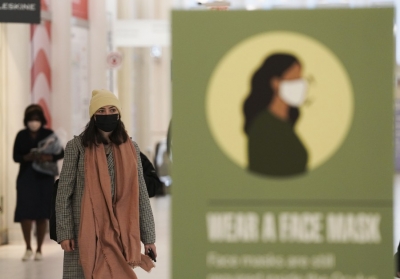 New York: New Covid strains are gaining ground across the world and in the US, new variant BQ.1 now makes up one in 10 cases nationwide, new data from the Centers for Disease Control and Prevention (CDC) has estimated.

The CDC had previously bundled BQ.1 and BQ.1.1 with their shared parent BA.5 in its weekly “Nowcast” estimates.

BQ.1 was first named by scientists in early September, based on sequences spotted across the US and several other countries, reports CBS News.

“When you get variants like that, you look at what their rate of increase is as a relative proportion of the variants, and this has a pretty troublesome doubling time,” Dr Anthony Fauci, the US president’s chief medical adviser, told CBS News.

BQ.1 variants have already outpaced many rival strains in European nations from England to Germany, which have already seen renewed waves begin.

According to the CDC, BQ.1 and BQ.1.1 each currently make up an estimated 5.7 per cent of infections around the country.

“While BQ.1 and BQ.1.1. represent a small but fast-growing subset of the Omicron variant, BA.5 remains the dominant lineage in the US,” said a CDC spokesperson.

Experts have cited the “sizable number of unique mutations” in variants like BQ.1 in speculating that it could evade immunity from prior infections or vaccination.

“However, so far little is known about what impact these mutations might have in affecting the severity of the disease, which would require further studies in animals and humans,” said the report.

As China imposes fresh lockdowns and travel restrictions amid Covid surge, the country has detected new Omicron sub-variants BF.7 and BA.5.1.7, which are highly infectious with greater transmissibility.