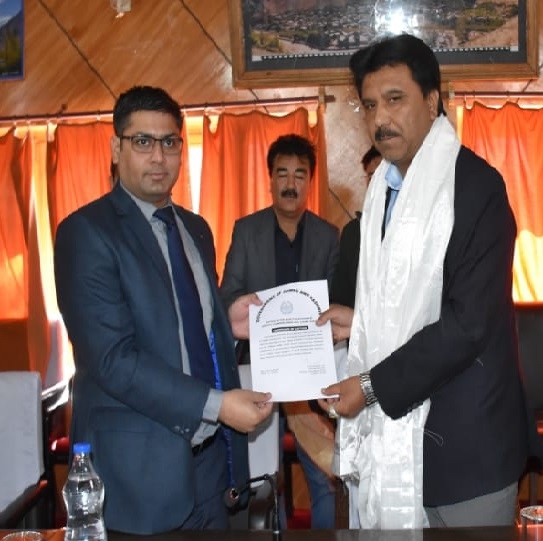 As per the agreement between NC and Congress, the two parties will share power in the LAHDC Kargil.

The Chairman-cum-CEC, as per the agreement, will be from NC (as Feroz was elected on Monday) while both the parties will have two Executive Councilors (Deputy Ministers) each.

The Council can have Chairman and four Executive Councilors. Post of the Deputy Chairman for the Councils of Leh and Kargil was recently created by the Government.

With NC and Congress joining hands, their strength in the LAHDC Kargil has gone up to 18 (NC 10 and Congress 8), which forms absolute majority in the House of 30.

The deal was finalized at a meeting which was attended by senior district leaders of NC and Congress tonight including Feroz Khan, Haji Haneefa Jan, district president NC and former Chairman of the LAHDC Kargil, Nasir Hussain Munshi, district president Congress, Zakir Hussain and Mohammad Ismail, both Councilors from Congress, Haji Mohammad Abbas and Mubarak Shah, both Councilors from National Conference.

Political observers were of the view that the NC and Congress alliance in Kargil was quite significant as both were major rivals in mountain locked district for Assembly and Parliament elections and it would be seen how they will contest upcoming Lok Sabha poll and the Assembly elections, whenever they are held.

Presently, Congress represents Kargil Assembly seat while an Independent holds Zanskar Assembly constituency. Though the Independent, Bakir Rizvi had won the election with support of the NC, he had later aligned with the BJP. In 2008 Assembly election, NC had won both Kargil and Zanskar seats, defeating Congress.

In the previous LAHDC Kargil, both NC and Congress remained bitter rivals, joining hands with Independents to topple the Councils of each other twice.

NC had emerged single largest party in the LAHDC Kargil in the elections held on August 27, the verdict for which was fractured with no party securing majority.