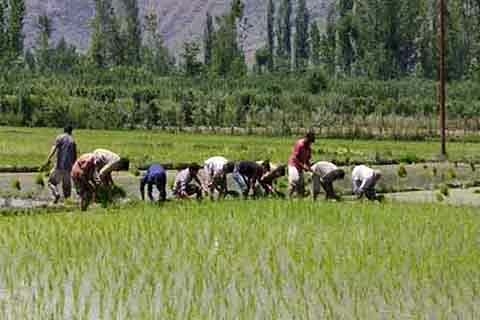 Srinagar:  A new survey has revealed that Jammu and Kashmir is among the top five states/UTs in the country having the highest farm income.

Titled `Situation Assessment of Agricultural Households and Land and Livestock Holdings of Households in Rural India 2019’, the National Statistical Survey (NSS) study has the average monthly income of farming community in J&K is Rs 18918.

It is more than 46 percent more than the national average. The average national income is Rs 10218.

Jharkhand has recorded the lowest monthly income at  Rs v4895.

As per the survey, Rs 12171 per month are earned by the farmers in Jammu and Kashmir from the wages.

The farming community, as per the survey, earns a meager Rs 292 per month by leasing out their land followed by Rs 1,980 per month from crop production, animal farming (Rs 2276), and non-farming business (Rs2200).

The survey revealed that 74.4 percent of the total households in Jammu and Kashmir are associated with agriculture and more than 54 percent of them own land between 0.01-0.40 hectares.

The survey said that 40.1 percent of the agricultural households in J&K were involved in crop production.

A meager 1.9 percent was associated with livestock farming, 0.9 percent other agricultural practices, and 10.0 percent in other non-agricultural enterprises.

The NSO survey also revealed that 97.4 percent of the farming community has accessed technical advice in 2019.   It said that more than 31 percent of the rural agricultural households in Jammu and Kashmir have borrowed loans from banks with an average outstanding amount of Rs 30,435.

Last month, Jammu and Kashmir Lieutenant Governor Manoj Sinha said that the mechanization of farming was one of the important factors to transform the agriculture sector and it will lead to sweeping changes and help farmers produce more.