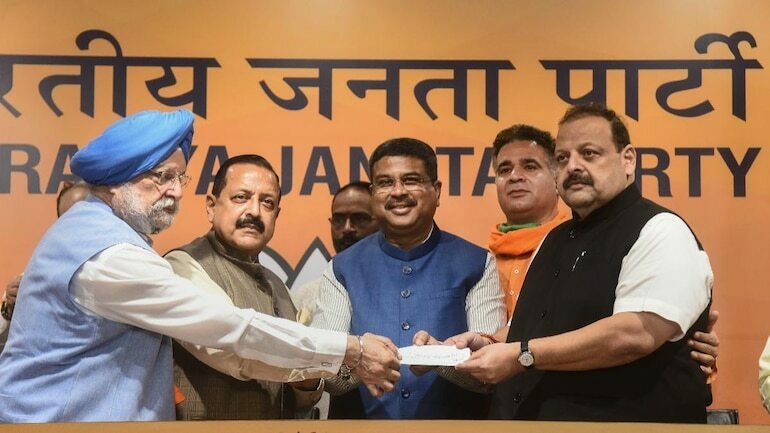 The inevitable has happened. National Conference, which was considering itself a cadre-based party driven by the core ideology of its founder Sheikh Mohammad Abdullah, is imploding.

Chinks have started appearing in the grand old party. This time Devender Singh Rana, a close aide of Farooq Abdullah and Omar Abdullah, is leading the jackknife brigade to engineer defections in the party.

Last week, Rana, who was National Conference provincial president for Jammu, along with former minister Surjit Singh Salathia resigned from the party and joined BJP in Delhi. Rana is the brother of the Minister of State in the Prime Minister’s Office (PMO) Dr. Jatendra Singh.

Two years on, both brothers sunk their political differences and joined hands again. Rana and Salathia were welcomed by a galaxy of BJP leaders including ministers when they joined the party in Delhi.

Niccolo Machiavelli once said politics have no relation to morals. It has come true for Kashmir in 2021. Rana, who once swore by NC’s ideology has become a chopper-in-chief trying to engineer defections.

On October 11, the Provincial Secretary, two District Presidents, two Municipal Corporators, one Block President, and several district and block committee members of National Conference from District Jammu resigned from the party and conveyed their support to Devender Singh Rana.

Power is glue and it binds people. Soon after PDP lost power, leaders started jumping the ship for greener pastures. The PDP leaders who were swearing by Mufti Mohammad Sayeed were the first to leave the party. In fact, the exodus continues even now. Mehbooba Mufti is the lone ranger in the party now.

The same is happening with NC.  The party withstood pulls and pressure and did not split despite being out of power since 2014.  But now it is tasting the same bitter medicine which once PDP had to swallow.  The stark similarity is that close aides are turning out to be tormenters in chief

Both NC and PDP have been in power at some point in time. Power is like drawing blood. Staying out for a long time is like excruciating pain. Despite political saber-rattling pre and post-abrogation of Article 370, NC continues to take part in the democratic process. Its three MPs including Farooq Abdullah regularly participate in the parliament proceedings.

When the entire political leadership was in jail, its two MPs—Justice (retd) Hasnain Masoodi and Mohammad Akbar Lone – were free and they refused to resign. When Farooq was released from detention last year, the first thing he did was to fly to New Delhi and attend parliament.

In fact, National Conference did an about-turn when it met the Delimitation Commission. It marked a significant shift in the NC’s policy post-August 5, 2019 when the Centre abrogated Article 370 and downgraded Jammu and Kashmir into two union territories.

Peoples Conference (PC) led by Sajad Lone is emerging as the biggest rival to National Conference. Playing son-of-soil card, he is trying to consolidate his position in north Kashmir. In the previous assembly, his party managed to win only Handwara and Kupwara seats. Sajad tried his luck in the parliament elections before, but he could not sail through.

Prior to the abrogation of Article 370, Sajad was the ally of the BJP. Despite having only two MLAs in the previous Assembly, he was made minister from the BJP quota in the PDP-led coalition government.

After the abrogation of special status, Sajad mend fences with Kashmir-based parties and joined Peoples Alliance for Gupkar Declaration (PAGD). However, after the DDC polls, he parted ways over proxy candidates.

In fact, Sajad was the spokesman of PAGD when he quit the alliance. His elder brother Bilal Gani Lone heads another faction of PC which is a part of the separatist Hurriyat Conference.

National Conference is facing a two-fold challenge How to stay united and how to counter the influence of Sajad Lone. The party though is trying to put up a brave face, yet the ground is slipping beneath its feet.