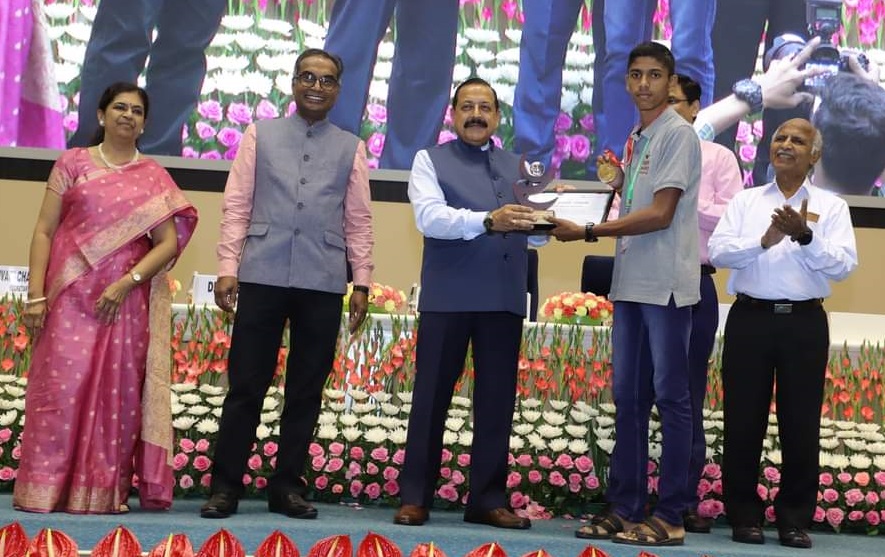 Inspire Award was given to Danish Ahmad Bhat by Union Minister of State for Science and Technology, Dr. Jitendra Singh.

Danish Ahmad, a student at Government Upper Primary School, Machipora, Handwara, said he was inspired to create this tool by his mother who used to prepare food on the conventional chulha for extended periods in the winter in a piteous state. He added that this device can be used for varied cooking purposes.

“In addition to boiling water, the device may also be used to bake and cook food items at various temperatures,” Danish said. “It can also be utilized to heat rooms in the frigid winters”, he added

The invention, Danish said, can help rural women who struggle with the frenetic nature of cooking, particularly during the harsh winter months.

For the NLEPC, all States and UTs had submitted a total of 6.53 lakh concepts and 576 of those were chosen for the exhibition in the years 2020–21.

Around 13 students of various government schools from Jammu and Kashmir made it to the National level exhibition of Innovation in Science Pursuit for Inspired Research (INSPIRE) awards for the academic year 2020-21.

The students, aged between 10-15, participated in a UT-wide e-exhibition organized by the State Council of Educational Research and Training (SCERT) and the National Innovation Foundation-India (NIF) earlier in January.

The escort team while inspecting the device of Danish Bhat informed that the device will be modified further to investigate the possibilities of employing it on a broad scale.

“The innovation shall be further improved and upgraded by a team of professionals who will mentor the selected students”, Ghulam Nabi Dar, a SCERT official accompanying the students, said.

Principal Secretary, School Education Department, J&K, Alok Kumar while appreciating the efforts of Danish in designing the innovation, said it is a proud moment for all of us to see our young kids attempting to keep up with the modern-day challenges and coming up with innovations of sorts. “We urge you to continue to submit your innovations and ideas and we are available to provide you with any assistance you may need”, Kumar said.

The scheme, INSPIRE, is one of the flagship programs of the Department of Science & Technology (DST), Government of India, that aims to motivate students in the age group of 10-15 years studying in classes 6 to 10.

For the Kashmir division, the State Level Exhibition and Project Competition (SLEPC) was conducted on 17 January, and for Jammu, on 19 January. A total of 116 students including 60 from Kashmir and 56 from Jammu exhibited their original ideas/innovations which were scrutinized by a jury of four experts.

Earlier, a total of 1123 students out of 10344 had qualified for the district level exhibition out of which 116 made it to the UT level.

The objective of the scheme is to target one million original ideas/innovations rooted in science and societal applications to foster a culture of creativity and innovative thinking among school children. Under this scheme, schools both government and private can nominate the 5 best original ideas/innovations of students through the official INSPIRE website. Entries to the award are accepted from all government and private schools.