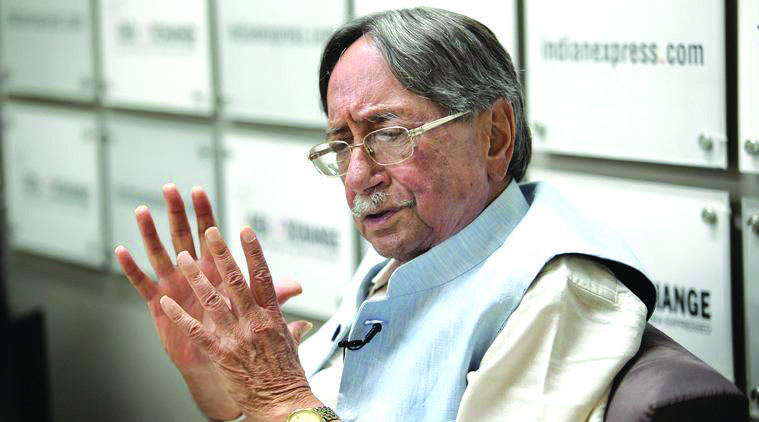 AS Dulat, member of the National Security Advisory Board at the Indian Express idea exchange in Noida on July 7th 2015. Express photo by Ravi Kanojia.

Srinagar, May 25: Former Chief of Research and Analysis Wing (RAW) A S Dulat has admitted that out of all Pakistani military dictators, General (Retd) Pervez Musharraf proved to be the best for India.
In his book co-authored with the former Director General (DG) Inter-Services Intelligence (ISI) Lt Gen (retd) Asad Durrani, the RAW chief praised General Pervez Musharraf for being reasonable with India.
“Musharraf was the best, the most reasonable with us,” wrote Dulat while comparing him with other Pakistani dictators like Ayub Khan and Zia-ul-Haq. He especially praised Musharraf for not trying to unite the Hurriyat Conference.
“My admiration of him comes from what I saw in the context of Kashmir. Without hesitation or doubt, in the last 25 years there hasn’t been a Pakistani leader more positive or reasonable on Kashmir than Musharraf. His repeatedly saying that whatever is acceptable to Kashmiris is acceptable to Pakistan — that was good for India. We should have taken that and built on it, but again we dragged our feet,” wrote Dulat.
He said Musharraf was hemmed in by American pressure because of 9/11. But whatever it was, he told the separatists to fall in line or become redundant, and that if they had political ambitions to fight elections, then to get on with it.
“Today Pakistan is trying desperately to get the Hurriyat together; Musharraf made no such effort. When he found that Geelani was an obstacle, he even said, at some meeting, ‘Get out of the way, old man.’
He was definitely forward-looking. If you ask a Kashmiri today, Geelani Saheb apart, he will say if anything is doable then it is the four-point formula.
“As for Musharraf the general, the army chief, the president—I don’t know anything other than what the Americans said, that he’s a good guy, English speaking, whiskey-drinking. We can do business with him,” wrote Dulat.
The former RAW chief said his favourite Pakistan politician was the late Benazir Bhutto. “She had charisma. She was good-looking, forward-looking, and I felt sad when she was killed because she had a future. It’s one of those ‘ifs’, you can say nothing would have happened, possibly. But there was no doubt she could carry people with her like nobody else in Pakistan,” Dulat wrote.
He however claimed that former Prime Minister Mian Nawaz Sharif had established better relations with India during the tenure of Atal Bihari Vajpayee.