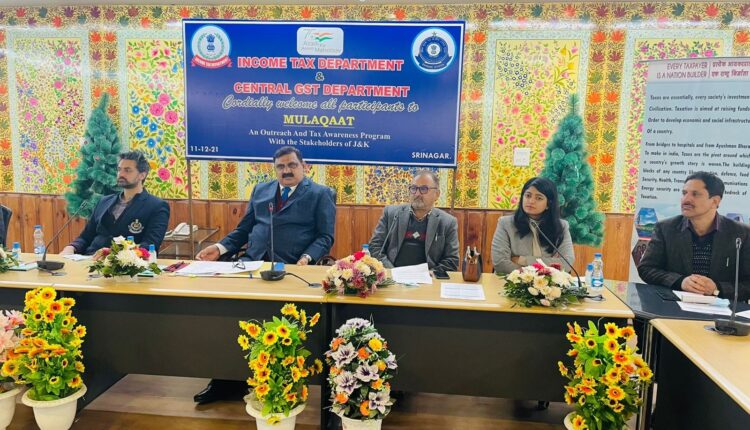 The purpose of these outreach programmes and interactive sessions was to understand the difficulties being faced by the public in respect of Direct and Indirect Taxes and to assist them in solving the problems along with motivating the youth to pay taxes, by directly connecting with the pulse of each district,” the statement said. “It is for the first time that such an exercise was undertaken to directly connect with the people of J&K and garner their feedback, suggestions and aspirations from the Government of India vis a vis the Income Tax Department & the Central GST Department. The aim has also been to find out about the expectations and suggestions of the people from the forthcoming Union Budget and to make the public aware about the technological advancements made by the new taxation regime to increase transparency and ease of compliance and to provide better taxpayers’ service,” the statement added. Meanwhile, the participants of ‘Mulaqaat’ in all the districts expressed great happiness that the Finance Minister of the Government of India had sent officers from the Income Tax Department and Central GST Department to listen to their concerns and gather feedback. The officers noted down the detailed points raised by the locals, collected feedback forms, collated the same and communicated them to the Union Finance Minister of the Government of India, Nirmala Sitharaman and Manoj Sinha in the form of the book, ‘Mulaqaat’.

The mission of the Income Tax Department has been to partner in the Nation Building process through its efficient, effective, transparent & fair Tax administration, resulting in sustainable revenue collection with objective of socio-economic welfare of the people. Over the years, the Department, through its presence in Srinagar, has steadily strived to uphold this vision by fulfilling its twin role as the revenue earning arm of the nation for resource mobilisation to empower a welfare state and implementation of tax policies in a fair and transparent manner.

The objective of establishing the newly inaugurated office in Srinagar, with a senior level officer, M.P Singh, overseeing the entire charge of Principal Commissioner of Income Tax, is to make the Department more accessible to the people of J&K and resolve their grievances in a time bound manner.