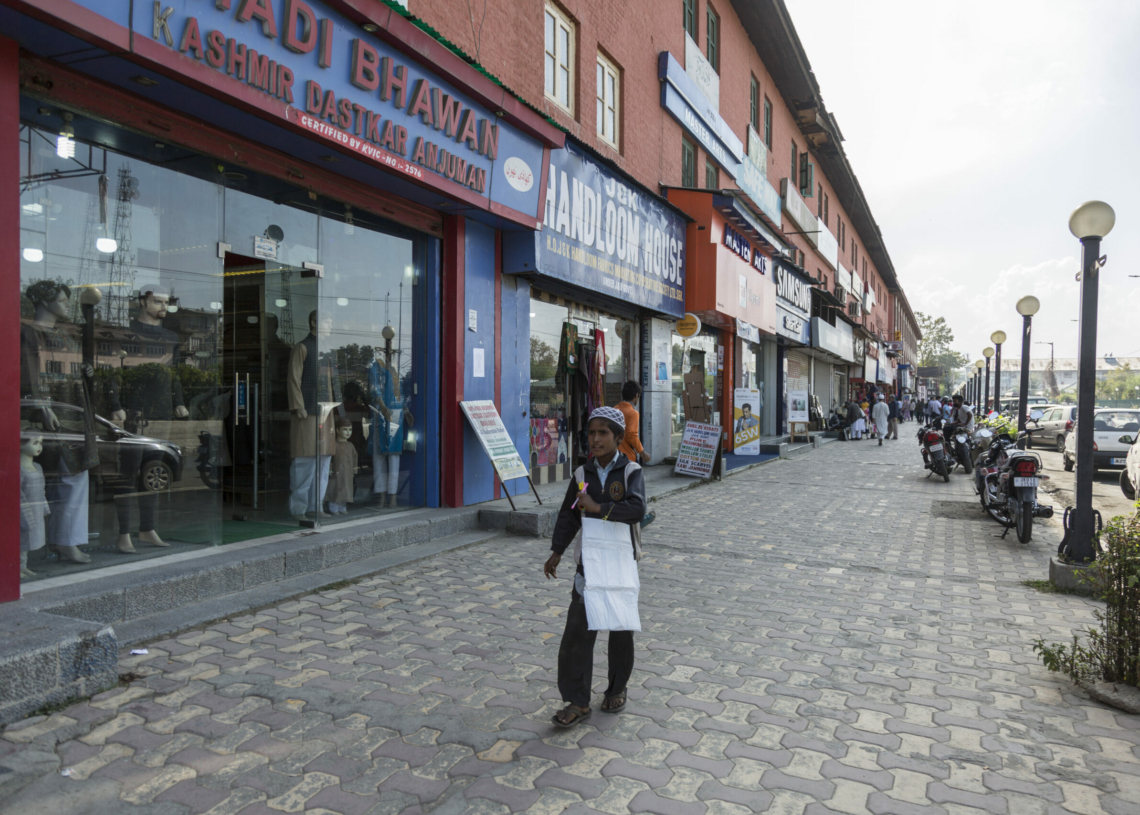 Srinagar: For the last three decades, 55-year-old Noor Mohammad has been selling socks on a cart stationed right outside the gate which once led to Regal Cinema, a few hundred metres away from Lal Chowk, the city centre of Srinagar.

However, the crisis that began in August last year refuses to end and for the first time ever, Noor feels he should push on the cart and do something else.

“Kaem cha namath ponse kam (the business is 90% lesser),” he says, as a couple of idle auto-rickshaw drivers surround him.

“I have been selling socks for 31 years now and I have never witnessed a crisis like the one I am for the last one year and ten days,” he says, adding, “People are hesitant to buy even a pair of socks, money has dried up everywhere.”

Close to where Noor’s cart is, Bashir Ahmad Wani sits alone in his shop surrounded by an array of bags made out of leather, rexine, and plastic.

It is afternoon and he hasn’t received any customers for the day so far.

Bashir is a second-generation leather merchant who has been in the trade for the last 20 years after his father started it in the 1960s.

Like Noor, Bashir too says he has never witnessed such a crisis before.

“For the last one year, businesses are facing the worst slump in Kashmir, the earnings are nearly zero as people don’t have enough to spend. Covid-19 has been a huge crisis, a sort of reprimand from Allah,” he says.

The Covid-19 pandemic and the political apocalypse that August 5, 2019 was when Jammu and Kashmir was stripped of its special status and divided and downgraded into two union territories have started to show their disastrous economic contours.

The shutters may be up, the markets may be wide open, but there are no buyers as shops after shops offer the same story: “People are not buying things as they have no money!”

Be it small business owners, people associated with tourism, transport, handicrafts, or even a salesman drawing a few thousand rupees while working in a small shop – everyone has been hit with a double whammy.

“Elsewhere people only witnessed a lockdown of a few months following the outbreak of this virus but in Kashmir, businesses have been shut for over a year now,” says Sheikh Aashiq, president Kashmir Chamber of commerce and Industry (KCCI).

He acknowledged that there was a considerable dip in the money circulating in the market but pinned hopes on the government’s recently announced “relief package”.

On September 19, Lieutenant Governor Manoj Sinha announced Rs 1,350 crore package for Jammu and Kashmir for reviving the ailing business sector of the Union Territory stating that “this was just a beginning and much more was in the offing.”

While the business community welcomed the package, it had counted to the commoners, who toil hard in the day to feed their families.

Abdul Rashid, an auto-rickshaw driver from Srinagar’s Kursoo Raj Bagh area was clueless how the package would help him and thousands of others earning daily wages like him.

“For the first six months after August 5 (2019), my auto (rickshaw) was halted. I didn’t earn a penny. Then in February this year, as I started to work again, Covid-19 hit us and we are yet to come out of it. Only Allah knows how I have managed to feed my family during this terrible time,” he said.

Asked about the economic package announced by the government, Rashid said he knows it wouldn’t reach him.

In August, a preliminary assessment conducted by Kashmir Chamber of Commerce and Industries pegged the business losses at over Rs 40,000 crore, while five lakh people have lost jobs from August 5 last year.

Tourism and handicrafts suffered the major brunt among all the sectors in the valley.

Last December KCCI released a ‘Preliminary Economic Loss Report’ which put the financial losses at 17,800 crores in the first 120 days of lockdown post abrogation of Article 370.