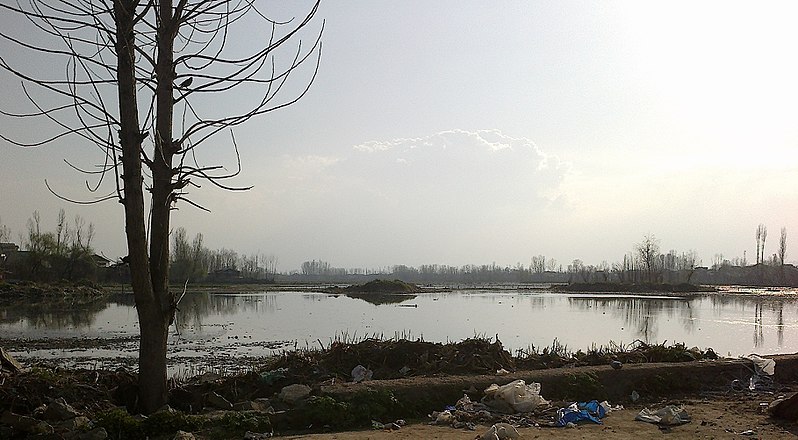 Srinagar: Jammu and Kashmir government and Nigeen Lake Conservation Organization (NLCO) have achieved a breakthrough after they restored the traditional navigation route of Khushalsar lake.

Under Phase 2 of Mission Ehsaas, the government and NLCO cleaned the Zadibal- Sazgaripra route of Khushalsar. Due to the encroachment and dumping of the waste, this traditional navigation route had turned into a cesspool

For the first time in 30 years, Shikaras cruised through Khushalsar, Gili Kadal, and Sazgaripora via Zaidbal.

“In  May, a cleanliness drive was held in the Zadibal area. Former senior civil servants joined the drive. The machine was moved towards the Saidapora route as decades-old muck had blocked the traditional route. The route was cleared and the stagnated water was able to move towards Saidapora,” said Chairman NLCO Manzoor Ahmad Wangnoo.

He said the cleaning of the route was very challenging due to the massive encroachment, landfilling, and weed growth.

“This part of the waterbody was completely neglected. Some miscreants tried to create hurdles. Some even confronted our volunteers. But after counseling, we managed to carry out the work for the greater good of the locals,” Wangnoo said.

Pertinently Phase 2 of Mission Ehsaas was launched in May when the machine was deployed in the area.

Officials said a series of meetings were held for speedy restoration of the navigation route. “A special Meeting was held with Principal Secretary, H&UDD who assigned the task to SMC to restore Gilsar and Khushalsar. The follow-up meetings were held with SMC and LC&MA to expedite restoration work,” said an official who was a part of these meetings.

Meanwhile, SMC and Forest Department have launched a drive to remove the trees that had blocked the channel from the Sazgaripora side.

As per the officials, a meeting with Waqf Board management was held for clearing the trees.

NLCO and the government last year collaborated to revive the Khushalsar lake, which had become a dumping site. A year after its revival, the lake has become a tourist attraction.