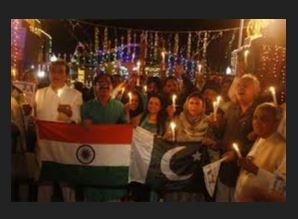 – Ali Sardar Jafri
Never were these lines more poignant than last night, when 60 people stood at the Swarna Jayanti Dwar at the Wagah border. 60 pairs of hands held candles to dispel the darkness shrouding the relationship between Pakistan and India. Songs and slogans filled the air.
‘Goli nahin boli chahiye, Jang nahin aman chahiye, Nafrat nahin mohabbat chahiye.’ Eyes welled with tears thinking of Asma Jahangir, Justice Rajinder Sachar, Madeeha Gauhar, and other beloved comrades now gone from our midst.
This was the culmination of the event organised over two days by the Hind Pak Dosti Manch, the Folklore Research Academy, Amritsar, the Punjab Jagriti Manch, Jalandhar, and the Pakistan India Peoples’ Forum for Peace and Democracy.
At the elegant Punjab Natshala, a packed hall of young and old listened to some scintillating speeches. There were academics, artists, activists, students, people from all over Punjab. Some had come all the way from Maharashtra, Andhra, Telangana, Delhi, Haryana, Tamil Nadu. They had travelled the distance to come to join their Punjab comrades in this mission for Aman Dosti.

The seed of people-to-people contact was placed in Punjab’s fertile soil by the stalwart Kuldip Nayar in 1996. He had witnessed the bloodied Partition and wanted to pass on its bitter lesson to future generations. He was joined by a few young men, including Ramesh Yadav and Satnam Manak. On the Pakistan side the flag bearer was Imtiaz Ahmed who founded the South Asian Free Media Association around the same time.
That was 23 years ago. The period witnessed the forging of deep bonds across the border. There were frequent journeys back and forth. For Asma Jahangir and Madeeha Gauhar, Amritsar was a second home. Pak India Theatre flourished on both sides with the partnership of Ajoka Pakistan and Kewal Dhaliwal, India. Asma came on mission after mission which included her most important mission, called friendship. Even in the darkest times these two women kept the link alive. In the words of the poet:
kya zulmaton ke daur mein bhi geet gaye jayeinge?
haan zulmaton ke daur mein hee geet gaye jayeinge.
A bus heralded by Ram Mohan Rai and Ravi Nitesh with 43 people on board left Delhi for Amritsar on August 13 of this year. The youngest rider was the 5-year-old child of Deepak Kathuria, and the oldest was 90-year-old Haru Tai, freedom’s child from Satara in Maharashtra.
Beginning with Kundli in Haryana and ending with Jalandhar, these yatris made 15 stops along the way, holding roadside meetings where everyone was welcomed. Their initial apprehension disappeared when they saw the common people’s response. Students, housewives, farmers, labourers, wayfarers, people from all walks greeted them with garlands, sweets, food, chai, and the warmest bonhomie.
It took them over 20 hours to reach Amritsar. The overwhelming public response to this Aman Dosti Yatra meant a delay at every padao, for they had to honour the hospitality which awaited them at every stop.
To a group of students at the Karnal stop they asked the question, ‘Give one reason for wanting friendship.’ The answer came in a single phrase. ‘Insaniyat ke naatey.’
The speakers at the seminar overwhelmed the audience with their well-articulated rationale for peace. Om Thanvi, editor of the newspaper with the largest circulation, spoke of the symbiotic relation between Urdu and Hindi as against the present effort to give language a religious identity. Kewal Dhaliwal spoke about Indo-Pak theatre as a binding force, Jiten Desai spoke on the fish-workers’ predicament in both waters. Dr Charanjit from Jalandhar spoke about the region’s geopolitics.
‘I am from an RSS family,’ said a man from the audience during the question hour. ‘PM Vajpayee after his historic bus journey had said about Pakistan, “You must win their hearts”. After my experience I wrote a line:
unhon ne kaha tha dil Jeet ke aana
hum lut gaye wahan! dil haar ke aa gaye.’
Students from Khalsa College, DAV College, Doaba Arya College, Millennium School, and Springdales School listened in complete silence to each word.
At the Sufi Music concert held at the Nat Shala the audience was treated to a musical feast. Dr Brar, the brain and spirit behind this facility began the evening which featured two young boys, Anadi Mishra and Khan Sahib. They sang classic, folk, Sufiana kalam of gurus and masters. Deepak Bali beautifully moderated this session too.
The mood for the final lap of the journey was thus set. Buses were made ready for the 25-minute journey to the border which has taken the lives of one lakh Hindus and Muslims. The monument erected by Folklore Research Academy right in front of ‘no man’s land’ bears testimony to that.

As candles were raised in the hope that love will be victorious, a melodious voice was heard from the Indian side, singing the song of South Asian icon Nusrat Fateh Ali Khan: Aaja tainu ankhiyan udiktiyan…
Away from Delhi, in these two days in the heart of Punjab, we got the clear vision that peace is possible.
In the often vitiated atmosphere of Delhi we are blinded by the strident agenda of television discussions and deafened by leaderly rhetoric. The real India remains hidden from our eyes because we never bother to leave our comfort zone. Here in Punjab, sitting with real people, each one of us felt a surge of hope. It was the youth who demanded that the colossal waste of resources in the name of enmity between these two closest of neighbours be reversed, towards human development. On both sides of the border children are still dying of starvation.
The small flames we lit last night rekindled the hope that the leaders of India and Pakistan will, for once, listen to the voice of their own people.
(Syeda Hameed is a writer and activist and lives in Delhi).