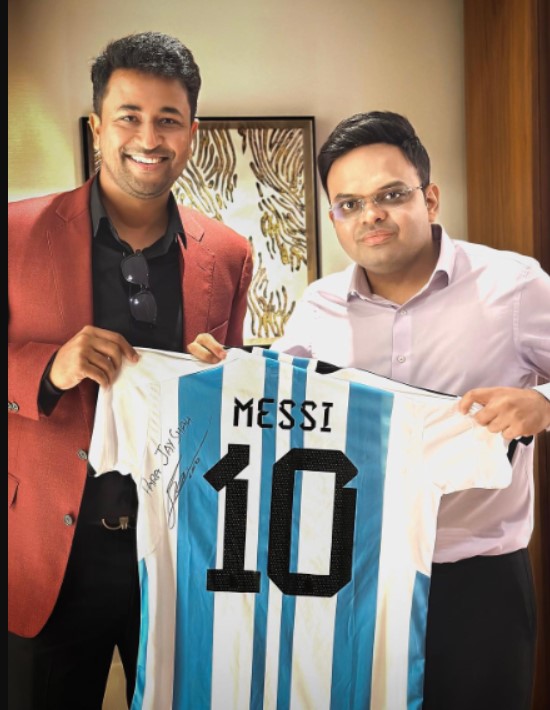 Cricket and football rarely cross paths. However, in a rare bonhomie between the two sports, BCCI secretary Jay Shah received a signed jersey from Argentina star Lionel Messi, who led his side to the FIFA World Cup title a few days ago in Qatar.

Former Indian cricketer Pragyan Ojha shared a picture on Instagram in which he can be seen posing with Shah with the same jersey from Lionel Messi.

The caption read, “#GOAT sends his best wishes & signed match jersey for jay bhai! What a humble personality. Hopefully I will get one for myself…. Soon”.

Ojha’s post soon got viral on the social media platform as Indian fans were in disbelief to see Shah getting such a special gift from one of the top footballers in the world.

The Argentina jersey bore the name of Lionel Messi with his famous number 10 printed on the back. The message on the jersey read, “Para Jay Shah (for Jay Shah)” signed personally by the World Cup winner.

Jay Shah had previously extended his congratulations to Argentina for winning the World Cup in a tweet, where he discussed the mind boggling encounter that the final was.

“What an incredible game of football! Both teams played extraordinarily well but congratulations to Argentina for winning their 3rd #FIFAWorldCup ! A well-deserved victory.”

Messi’s desire of winning the FIFA World Cup Trophy, which eluded him thus far in his career, was realised with the title win. The 35-year-old had a great tournament, contributing three assists along with seven goals, earning him the Golden Ball for his overall play.