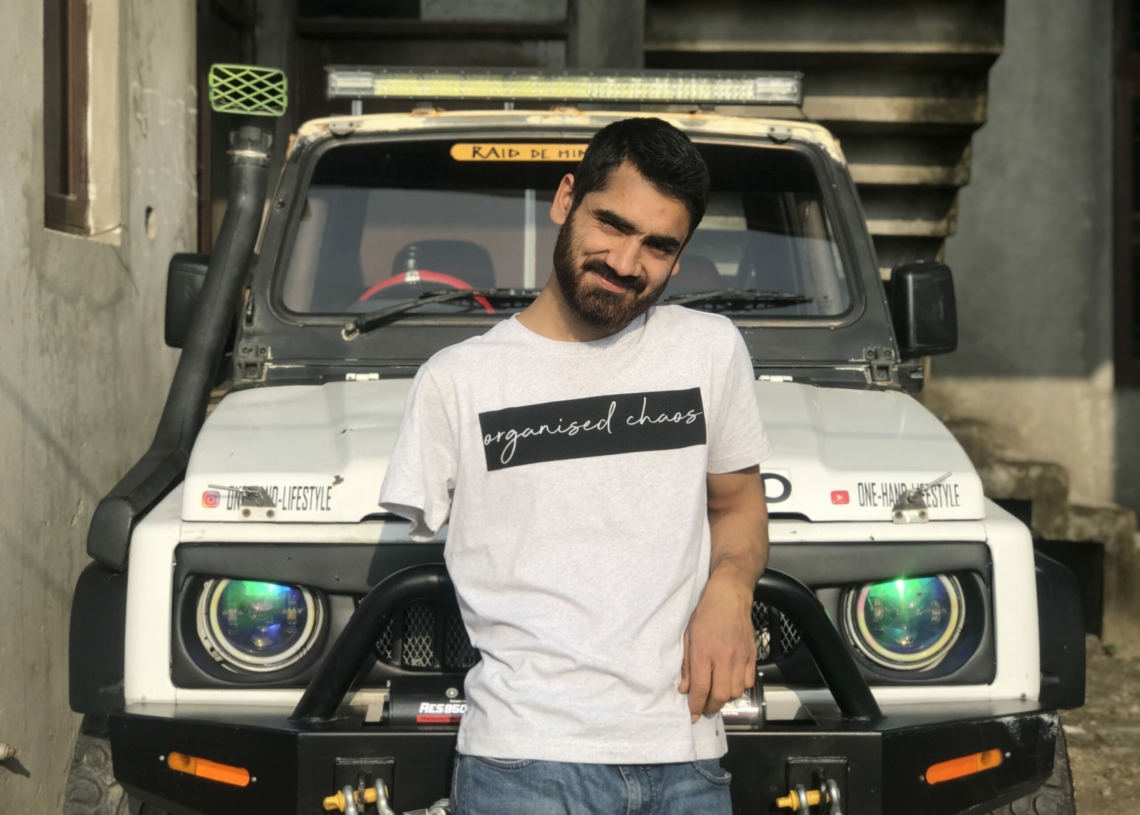 Srinagar: He shuffles gears far swiftly than an average driver, making sure the steering wheel is well in control as he cuts through rocky terrains, gushing streams, and bumpy woods.

Sayer ‘King’ Abdullah, as he likes to call himself, feeds his adventure-junkie self, going to the extremes to follow his passion for off-roading and motorsport –– all with just one arm, the left one.

The 23-year-old law student from south Kashmir’s Anantnag district is one of the most talked-about members of ‘Kashmir Off Road’, the valley’s first off-road adventure and motorsport club.

In 2007, Sayer, then in class 5, met with a serious accident when brakes of his school bus failed. The vehicle tumbled over killing Sayer’s schoolmate while badly fracturing his arm.

Frantic, his family rushed him all the way from Anantnag to Srinagar’s Bone and Joints hospital. Seeing his condition, the hospital referred him to SK Institute of Medical Sciences (SKIMS) in Soura.

But it was already too late, and doctors at SKIMS had to make the tough decision: amputate Sayer’s right arm to save him.

It was a life-altering event for a bubbly and full of life Sayer. However, 13 years later, he is anything but handicapped, and takes on challenges that will leave most of us ‘normal’ people trembling.

“As a child I was always fond of driving,” he said.

But after the accident, Sayer felt his dream to drive a four-wheeler was impossible.

It was his parents and his childhood friend who never gave up on him.

“My parents supported me, and my best friend Shafat helped me learn driving. I took it as a challenge and achieved it,” he said.

As soon as he turned 18, Sayer passed the driving test and got his license.

“I passed (the test) without any difficulty,” he said.

But Sayer did not want to simply drive on metalled roads. He wanted to take his passion to the next level.

Offroading, that is what he aimed for.

He first drove a Tata Safari. Manual, no modifications, and a challenge Sayer’s brain and his only hand boldly accepted.

“In the beginning it was difficult, but I got used to it. It is all about calculating the next move,” he said.

Sayer wears a prosthetic arm only when he is not driving.

“It is cosmetic…just for show,” he said.

While he followed ‘Kashmir Off Road’ for many years, Sayer finally approached the club a year back and got its membership.

“While I had already tried a bit of off-roading myself, joining a club and driving with a team was a different experience for me,” he said.

The club, which offers membership to people who are “really passionate” about motorsport and offroading, welcomed Sayer in.

“Sayer contacted us last year. He did not mention that he was specially-abled. He told us about his passion for driving and how he wanted to explore far off places. So, we finally called him over and were really shocked to see that he was driving with only hand,” said Farah Ali, who handles the PR at ‘Kashmir off Road’.

“We took him along in a few trips and noticed that he was an excellent driver,” she said.

Sayer has been on off-roading trips to Tosa Maiden, Bangus Valley and Batakhsar in Yousmarg.

“I like the power of it. I have named it Blizzard after one of my friends suggested it and said it suits me.”

Ali Sajid, the founder-owner of ‘Kashmir Off Road’ said Sayer was focused and diligent when it comes to driving in tricky situations.

“He assesses the situation better than anyone else,” Sajid said.

“He wants to participate in motorsports and off-roading events that happen in India. We will provide him all the support we can,” he added.

Motorsport, if pursued professionally, can bring laurels as was the case with Abrar Wani, a member of ‘Kashmir Off Road’, who represented Team India during Dubai kartdrome endurance championship and bagged secured 2nd-runnersup for his team.

The championship had 30 teams participating from all over the world. The last team that represented India in the competition was 12 years ago and comprised top drivers from the country including Narain Karthikeyan, Karun Chandhok, Armaan Ebrahim, Deepak Chinappa, Eshaan Singh and Ameya Walvalkar.

Sayer too eyes such competitions.

“Besides my career in law, I want to be a professional racer in circuit racing and offroad rallies,” he said.

Asked who does he drive around in his family and whether they are confident sitting next to him in a car, Sayer said: “My parents feel safer when I am driving. I have driven to Chandigarh and Aligarh with them.”