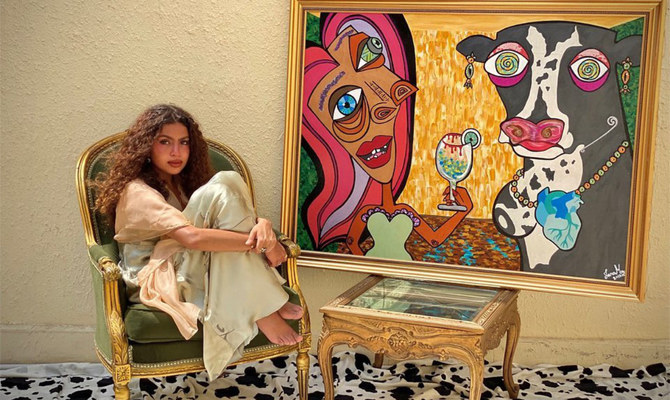 RIYADH: Shunning inhibitions, a Saudi painter is trying to take her modern abstract style to next level after receiving unexpected support from the government

Arab News reported that Jana Mousa has been the subject of criticism for portraying nudity and womanly shapes in her vibrant artwork.

But backed by her family and buoyed by Saudi government support for the arts, she remains determined to open her own modern art museum to showcase her work and that of other up-and-coming artists.

“My art isn’t traditional, but what makes me creative is that I don’t relate myself to an idea or a concept of one agenda, because I don’t want to be in a box. I feel as though many people still hang on to traditional art, the art of horses, Arabic calligraphy, and such, but when they see modern art, it’s new to them, and the reaction varies. This is why I want to introduce modern art to the public and let it have its space,” she told Arab News

It was during the coronavirus pandemic lockdown when Mousa rediscovered her love of painting and with the help of her family, she set up a social media account and started posting her work online.

She said: “I was criticized for portraying nudity and, in general, for my modern style, and when I displayed my work in Al-Balad (the historic area of Jeddah), I got comments that my paintings were just doodles that ruined the place. Because they did not show a horse or swords, then, to society, it was not considered art.”

Undaunted, she has since gone on to exhibit her pieces at Jeddah corniche, the port city’s Durrat Al-Arus, Culiart gallery — as part of a collaboration with chef Joud Badr — and in March, the Silence art gallery.

“Chaotic and full of life is how I would describe my artwork. I don’t have one direction, and I like to mix styles, but eventually, a pop of color needs to be included in my paintings.

“I like to feel the painting and touch it. Art doesn’t have rules or right or wrong; anything you do is art, and the possibilities are endless,” Mousa added.

She plans to open her own modern art museum to showcase her artistic style, support local artists, and provide a space for them to exhibit their work.

“I am noticing a lot of support from the government to empower art. The Jameel district in Jeddah is a good example of art encouragement, and many local artists are invited to display their artwork in Al-Balad,” she said.