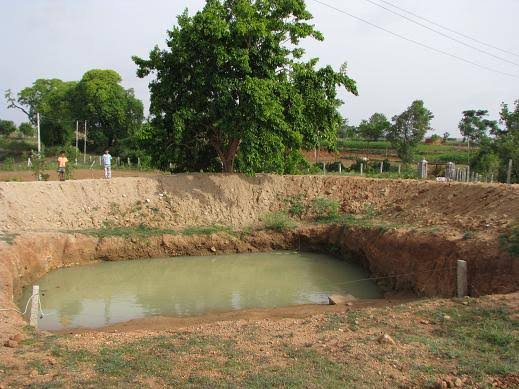 Dehradun: A man has dug 3500 small ponds to store rainwater in Chamkot village of Uttarakhand.

Dwarika Prasad Semwal started going door to door in May, convincing people to dig pits near their homes to store rainwater.

Seven months on, a total of 3,500 water bodies have come up over an area of 3 sqkm in the village as a result of Semwal’s persistent efforts.

However, involving people in the campaign called ‘Kal Ke Liye Jal’ (Water for tomorrow) was not easy.

“They seemed attentive as I urged them to make a small but significant contribution to save water, recharge the receding water table underground and offer birds and animals a means to quench thirst by digging ponds.

“But the response initially was rather lukewarm. It got me thinking what I could do to lure them to the campaign in larger numbers,” said Semwal, who also heads the Himalayan Paryavaran Jadibooti Agro Sansthan.

Soon an idea dawned upon him. Semwal began asking people to dig water bodies in memory of a near and dear one or to mark an important occasion in the family like a marriage anniversary or a birthday.

“I dug two water pits in memory of my two nephews to show the way and people followed. If some did so to celebrate their children’s birthdays, others did it to immortalize the memory of their ancestors,” Semwal said.

On Semwal’s request, Chief Minister Pushkar Singh Dhami allowed him to dig a pond on his birthday in September this year in the forest of Dudhli in Dehradun.

Connecting the campaign with filial sentiments struck a chord with people as they began to join the campaign in larger numbers, Semwal said.

“I am satisfied that our efforts are bearing fruit. As many as 3,500 ponds or water pits have come up already in Chamkot village and the process continues.

“We now plan to dig 1,000 such ponds in Dehradun too as its receding groundwater levels are causing concern among experts,” he said.

At least 70 women volunteers from the ‘Ganga Sakhi Sangathan’ have joined the campaign.

“We are happy to join this campaign for saving water. Together, we have created 3,500 ponds. We feel enthused to extend our activities to new areas,” the president of Ganga Sakhi Sangathan, Mahendri Chamoli, said.

Ram Kumar Chamoli, a member of the organization, said, “We feel blessed to be a part of a save water campaign like this in the memory of our ancestors.” Parvati Devi, a resident of Chamkot village, said she dug two ponds in the name of her family deity and ancestors. “This initiative has given us a chance to honor our forefathers and fulfill a duty to society.” Each of the participants is not just digging pits but also contributing Rs 50 per month to fund the campaign, Semwal said.

The average size of such ponds or water pits is supposed to be three to five feet wide and 1.5 feet deep.

“But we have kept it flexible and it depends on the availability of space. If the participants lift a spade and a shovel to dig a pit that’s enough,” he said.

Not just recharging the water table, if ponds are dug deep in the forests, water will be available for wild animals in their natural habitats, reducing chances of man-animal conflicts, Semwal said.

Such water bodies can help in controlling forest fires and increase the green cover, he said. However, since permission from authorities is needed to dig such water bodies in forest areas, laws may have to be relaxed so that this initiative can be extended across the state, Semwal added. (Agencies)