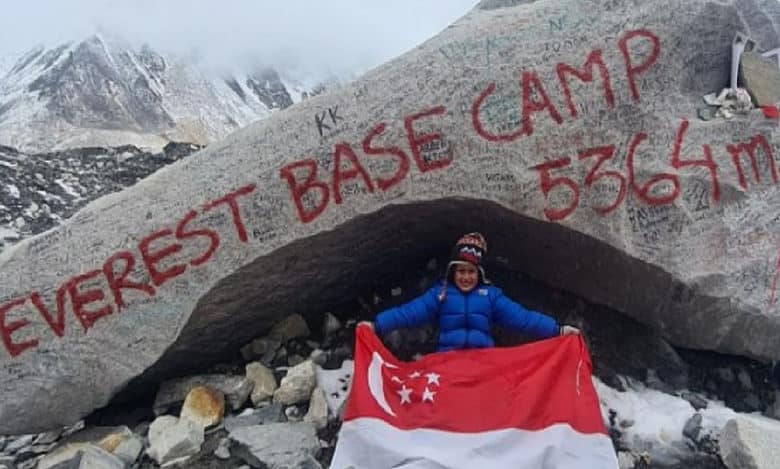 Singapore: A six-year-old boy of Indian origin has become the  youngest Singaporean to finish the Everest Base Camp trek in Nepal.

Om Madan Garg made the 10-day journey with his parents in October, reaching the south base camp in Nepal at an altitude of 5,364 meters, after a trek of 65 km.

The outdoorsy child is no stranger to adventure — his parents have taken him on backpacking trips to Vietnam, Thailand, and Laos since he was just two-and-a-half months old.

Om, his father Mayur Garg, 38, and mother, Gayatri Mahendram, 39, kicked off their 10-day trek on September 28, aided by a guide and two porters, The Straits Times newspaper reported on Monday.

Their entire journey has been documented on the family’s YouTube travel channel, The Brave Tourist, in a seven-part series.

“I want to see the whole world,” said Om, the Kindergarten 2 student from Canossaville Preschool whose 65 km trek took him past remote villages, Nepalese temples and monasteries, and scenic vistas of Himalayan mountains like the Everest, Lhotse and Lhotse Sar.

When the going got tough on the undulating and rugged paths toward the Everest Base Camp, lollipops, raisins, and cookies kept Om going on the once-in-a-lifetime expedition with his parents.

Mayur — a senior business analyst and avid mountain climber who has scaled peaks in Indonesia, Russia, and Tanzania — had made the trip to Everest Base Camp in November 2021, and thought it would make for a fun family trip.

To prepare for the trip, the family watched YouTube videos of other trekkers who had logged the journey and made it a point to be active every day for six months before the trip.

“We live in the Yio Chu Kang area, and we walk to the Marina Bay Sands area which is about 10 km away. It takes us four to five hours, but we just go,” Mayur said.

The regime also included swimming, stair-climbing, and excursions to places like Fort Canning.

“Fort Canning was hard because we had to go up and down the stairs 30 times. But because it was hard when we were training, when we went to Everest Base Camp, it was easy,” Om said.

The high-altitude hike, with an elevation gain of about 2,500 m, is a challenge even for adults. From the starting point at the Nepalese village of Lukla, which is at 2,860 m above sea level, the trio headed to the Sherpa capital of Namche Bazaar (3,440 m) and frozen lake bed Gorakshep (5,164 m) before reaching the Everest Base Camp (5,364 m).

The family originally planned for a 13-day trek so that they could go at an easy pace of 5 km a day on the trail. But bad weather conditions meant that their helicopter ride to Tenzing-Hillary Airport in Lukla, notorious for being the most dangerous airport in the world, was held back for two days.

The family had to make up for the lost time by covering more distance per day, especially on the first day, when they hiked 12 km to the village of Benkar.

“Om coped and went along, but towards the end, I got a bit of altitude sickness and had headaches. It’s a difficult journey because it’s all uphill,” said Gayatri, a senior physiotherapist, recalling the first day of the trip.

Om fell sick on the second night of the expedition. “I had a tummy upset, and I was feeling yucky. I had to change my trousers three times, but I only had three pairs of trousers. I had to wash my trousers in cold, cold water,” he said.

Om’s parents added that he was able to continue the journey after he rested and took some medication from a local pharmacy.

“There was a plan for every kind of situation. We had helicopter tickets already booked. If something breaks, we thought, we will fly back,” said Mayur. Thankfully, the rest of the trek continued without major hiccups.

The family used to wake up at about 6 am every day while on the trek and would hit the trail after breakfast at about 8 am.

After a few hours of trekking, they would break for lunch and then continue on their journey until 3 pm, before retiring for the rest of the day at local tea houses.

“We brought all these little card games to play with Om, and we had notepads, so we’d also play games like tic-tac-toe to pass the time,” said Gayatri. They went to bed at about 7 pm because it was cold and there was nothing much to do at night.

The sight of the young boy on the trail amazed other trekking enthusiasts. The family met a group of six Singaporeans who gave Om their team T-shirt as a souvenir.

“They were so emotional after seeing someone so small doing something that they were doing,” said Mayur.

“My favorite part of the trip is the Hillary Bridge because it’s higher than all the other bridges,” he said, referring to the 150m-high suspension bridge that is a popular photo stop along the route.

It was a proud moment for the family when they reached the base camp on the afternoon of October 7. “All those emotions that we felt, the stress, the strain – it was so surreal,” said Gayatri.

“I felt good, I did something I’ve never done before,” said Om of his achievement.

The family of three returned to Kathmandu by helicopter after spending a night in the nearby town of Gorakshep.

Om now has his sights set on another ambitious trek to the base camp of Ama Dablam, the third most popular Himalayan peak in Nepal among climbers after Everest and Mera Peak.

He caught a glimpse of that mountain range while on the Everest Base Camp trek. “It looks beautiful,” said Om. (Agencies)