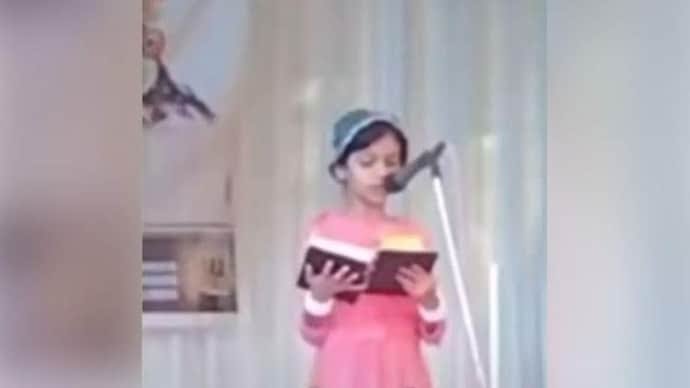 Parvathy and her twin sister Parvana at the Chemmarathur LP School.

Teacher Ruqaiya said both children are good at learning the language

Parvathy’s father Nalish Bobby is an IT professional while her mother Dina Prabha is an English teacher. Media reports said it was the parents who wanted their children to learn a new language as they feel it can be beneficial to them in the future.

Early this month, an Islamic institute in Kerala set an example of communal harmony by teaching Sanskrit to its students. The objective behind teaching Sanskrit, Upanishads, Puranas, etc. is to raise awareness about other religions, Onampilly Muhammad Faizy, the principal of the Academy of Sharia and Advanced Studies (ASAS) run by Malik Deenar Islamic Complex (MIC), said.

Important portions of the Bhagavad Gita, Upanishads, Mahabharata, and Ramayana are selectively taught in Sanskrit to the students over eight years after they pass out of Class 10, he said.

The selective teaching of these texts is because the institution is primarily a Sharia college where other languages, like Urdu and English, are also taught besides a degree course in Arts as it is affiliated with Calicut University.