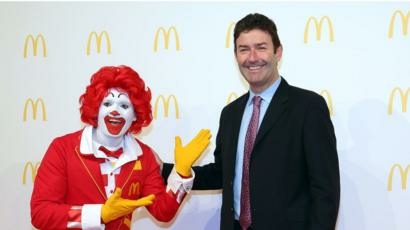 McDonald’s Corp. sued ousted leader Steve Easterbrook, seeking to recover tens of millions of dollars in severance pay after discovering evidence he had sexual relationships with multiple employees, tried to cover it up and arranged for one worker to get a lucrative stock award.

His termination last fall over an improper relationship shouldn’t have included severance pay because he “concealed evidence and lied about his wrongdoing,” the company said in a filing, reports said.

Easterbrook had originally admitted to having a consensual relationship with just one co-worker, but information the company received from an anonymous tip in July led the company to further investigate. It concluded he had been involved in sexual relationships with three additional company employees before his exit, according to a company filing Monday.

The evidence also shows Easterbrook approved a special discretionary grant of restricted stock units worth hundreds of thousands of dollars to one of the employees after their first sexual encounter — and just days before their second, the company said.

As a result, the fast-food chain filed a complaint in the Delaware Chancery Court to recover any compensation and severance benefits that he received when he left his post. The company has also taken steps to prevent Easterbrook from exercising any stock options or selling any shares.

“We recently became aware, through an employee report, of new information regarding the conduct of our former CEO, Steve Easterbrook,” he wrote in the internal memo, reviewed by Bloomberg News. “While the board made the right decision to swiftly remove him from the company last November, this new information makes it clear that he lied and destroyed evidence regarding inappropriate personal behavior and should not have retained the contractual compensation he did upon his exit.”

Easterbrook got $675,000 in severance and health insurance benefits and stock awards that Bloomberg valued at more than $37 million last November.

McDonald’s shares were little changed in premarket trading Monday in New York. McDonald’s rose 3.5% this year through Friday, roughly in line with the S&P 500 Index.