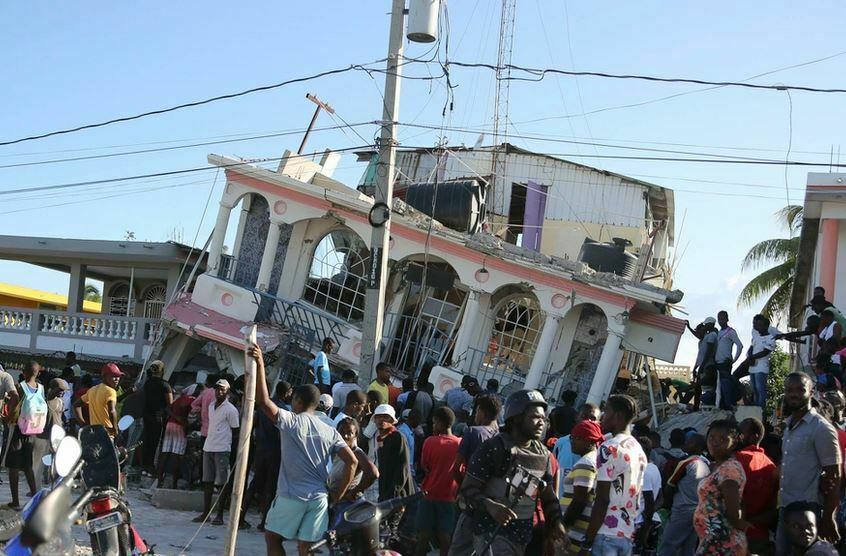 The death toll from a 7.2-magnitude earthquake in Haiti climbed to 1,300, a day after the powerful temblor turned thousands of structures into rubble and set off frantic rescue efforts ahead of a potential deluge from an approaching tropical storm. Saturday’s earthquake also left at least 5,700 people injured in Haiti, with thousands more displaced from their destroyed or damaged homes.

Survivors in some areas were forced to wait out in the open amid oppressive heat for help from overloaded hospitals. Yet the devastation could soon worsen with the coming of Tropical Depression Grace, which is predicted to reach Haiti on Monday night. Notably, US National Hurricane Center has warned that Grace could bring heavy rain, flooding, and landslides.

The earthquake struck the southwestern part of the hemisphere’s poorest nation, almost razing some towns and triggering landslides that hampered rescue efforts in a country already grappling with the coronavirus pandemic, a presidential assassination, and a wave of gang violence.

The epicenter was about 125 kilometers west of the capital of Port-au-Prince, the US Geological Survey said, and aftershocks continued to jolt the area Sunday. Meanwhile, many families salvaged their few belongings and spent the night at an open-air football pitch. On Sunday, people lined up to buy what little was available- Bananas, avocados, and water at a local street market.

Prime Minister Ariel Henry declared a one-month state of emergency for Haiti and said he was rushing aid to areas where towns were destroyed and hospitals overwhelmed. An ex-senator rented a private airplane to move injured people from Les Cayes to Port-au-Prince for medical assistance.

Sunday’s count from Haiti’s Office of Civil Protection raised Saturday’s death toll from 304 dead. The agency said more than 7,000 homes were destroyed and nearly 5,000 damaged. Hospitals, schools, offices, and churches were also affected. Hospitals were overwhelmed at a moment when the country with 11 million people has been struggling with the pandemic and a lack of resources to deal with it.