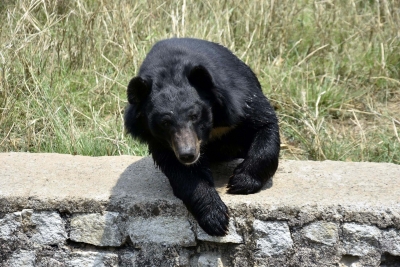 Srinagar, Sep 11: A local was injured on Sunday in a bear attack in the densely populated Rajbagh area of Jammu and Kashmir’s Srinagar city.

Officials said the watchman of a private school was injured when a bear attacked him in the Lal Mandi locality near densely populated Rajbagh area.

The authorities have advised people to stay indoors till the bear cub is caught.

Officials of the wildlife protection department were rushed to the densely populated residential area after locals spotted a bear cub.

“We have deputed our team to catch and relocate the bear cub spotted in the area.

“Residents are advised to stay indoors till the bear cub is caught,” said the officials of the wildlife protection department.

Rashid Naqash, regional wildlife warden, told that garbage dumped at populated places was the main attraction for the wild animals to move towards human habitations.

“Wherever, our CCTV cameras have spotted a wild animal in the populated areas, these are seen around garbage sites,” the wildlife warden said.