Man caught on camera throwing body into river in UP; deceased had died of Covid on Friday 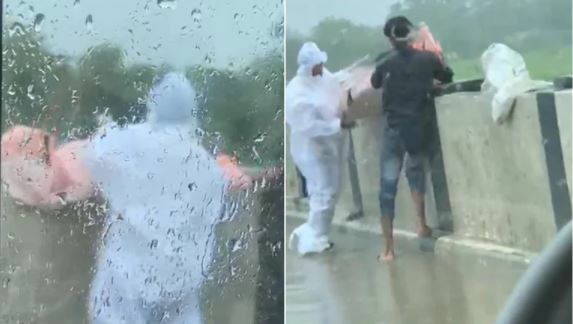 In a shocking video that has gone viral on social media, a man wearing a PPE suit is seen throwing a body from a bridge into Rapti river in Uttar Pradesh’s Balrampur district.

The entire incident was caught on camera.

The video, which has been shared multiple times on social media, shows two men throwing a body into the river in Kotwali area of Balrampur. One of them is seen wearing a PPE suit.

The police, according to media reports, have identified the victim as Premnath, a resident of Shohratgadh Siddharathanagar.

A report by India Today quoted the concerned chief medical officer (CMO) saying that the deceased had been admitted to a hospital on May 25 after he tested positive for Covid-19. He died on May 28 while undergoing treatment for the infection.

The police have registered a case and the investigation into the incident is underway.

The incident comes barely two weeks after several bodies were seen floating in rivers in Bihar and Uttar Pradesh, sparking outrage across India.