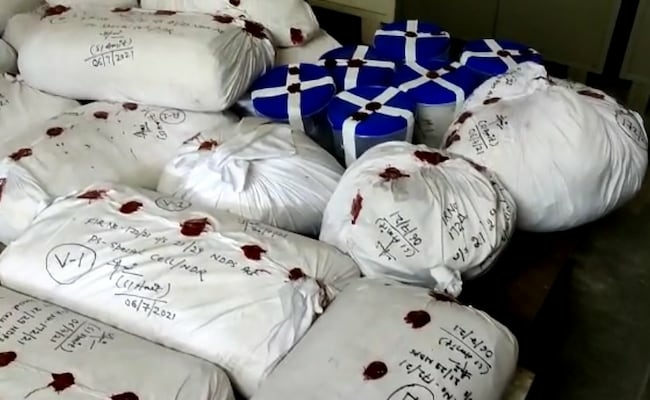 In one of the largest heroin hauls ever, the Delhi police has discovered 354 kilos of drugs worth more than Rs 2500 crore at a house in Faridabad and have, so far, arrested four people including a resident of south Kashmir’s Anantnag district.

Such huge quantity of heroin has brought to light a massive international drug racket spread across Afghanistan, Europe and parts of India, reported NDTV.

Officials, the report said, are investigating a narco-terrorism angle in the case.

“The police have arrested an Afghani national, Hazrat Ali, a resident of Kashmir’s Anantnag, Rizwan Ahmad, and Gurjot Singh and Gurdeep Singh from Punjab’s Jalandhar. This racket is spread across Afghanistan, Europe and several parts of India,” said Special Commissioner of Delhi Police Special Cell Neeraj Thakur as per the NDTV report.

More than 100 kg of chemicals used for the heroin were also seized by the police. The overall international value of the drugs has been pegged at more than ₹ 2,500 crore and the haul was intended to be sent to Punjab.

The police, during investigation, found that drugs from Afghanistan — hidden in sack bags and cartons — were being sent through Iran’s Chabahar port into Maharashtra’s Mumbai via Jawahar Lal Nehru port.

“The drugs were then sent for processing to a factory near Shivpuri in Madhya Pradesh and the heroin was prepared with the help of experts in Afghanistan. Following this, the drugs were sold in Delhi, Punjab, Haryana, Rajasthan and Jammu and Kashmir among other states,” the official said.

The accused arrested from Punjab said the mastermind behind the drug racket, Navpreet Singh, has been operating from Portugal.

“It was also found that some of the funds for the racket were coming from Pakistan… we can’t rule this out and will investigate this angle as well,” Thakur said.

The special cell of the Delhi Police have arrested the accused involved in the international drugs racket.

Heroin weighing 283 kg and pegged at approximately ₹ 2,000 crore in the international market, being smuggled into Mumbai from Iran by sea, was also seized by the Directorate of Revenue Intelligence earlier this week.

Comments
Last month, the Narcotics Control Bureau in Delhi busted an international drug trafficking syndicate with the arrest of eight people and seizure of 22 lakh psychotropic tablets and at least 245 kg of similar drugs that were being allegedly peddled over the darknet.