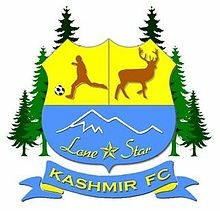 The name – Lonestar Kashmir FC – is not mundane. It sounds inquisitive. I imagine star would perhaps indicate the unreachable heights and Lone, signifies the surname of the owner/promoter. And among billions of constellations, a lone star assumes kingship.

In football world, we have a few more Lone Stars viz. Austin Lone Stars – a soccer club that competed in United Soccer Leagues between 1987 to 2000. Similarly, national soccer team of Liberia are nicknamed as the Lone Stars. Other than football, globally, the name ‘Lone Star’ is famous in – hospitality businesses, investment companies, transportation, film & TV, music, sports and others.

And here in Kashmir, popularly known as Kashmir FC, Lonestar Kashmir Football Club is a dream project of Iftikhar Ahmed Lone, its founder & Chairman. The club, first of its kind in the state, has been floated to promote football amongst the talented youth of the State of Jammu & Kashmir and help them reach the pinnacle of the game.

A successful businessman having established – Lonestar – as a global brand of Kashmiri handicrafts and jewellery in the middle-east and many European countries over the past four decades, Iftikhar returned back to the valley in 2013 only. In quest for self-actualization, Iftikhar, a college-level footballer of yesteryears, planned to do his bit to contribute to the motherland by promoting the game of football in the valley and thus, ‘Lonestar Kashmir FC’ came into being. The idea was to introduce a Kashmir-based club in the professional football map of the country.

Talking on this ambitious project, Iftikhar says, “On return from the gulf, I witnessed only cricket flourishing in the valley in the form of downtown leagues promoted by prominent businessman of the valley. In pursuance to floating the professional football club, in July 2013, I came in contact with Ex-president J&K Football Association Nazir Ahmad Khan and it was after discussions with him, Lonestar Kashmir FC was incorporated as a Private Ltd. company in July 2014 to fulfil AIFF club licensing criteria and subsequently got affiliated to the J&K Football Association. The credit of drawing the roadmap and executing it as per the procedure in vogue goes to young and dynamic Majid Yousuf.”

Presently, the club management includes the club patron Iftikhar A Lone, who is the owner and Chairman of the Club. Nazir Ahmad Khan, former President, J&K Football Association is the Executive Director, while as Tauseef A. Khan is the Overseas Manager. Former footballer Naseem-Ul-Gani works as General Manager and young hotelier Fahd Khan is the Managing Director of the Club.

Till recently, the technical team was headed by Mr. Hilal Rasool Parray – AFC PRO license coach along with a panel of assistant coaches for U-13, U-15 and U-18 teams and other youth development programmes. By resigning from the club to join his parent institution, Hilal has made way for a foreign coach into the team, albeit having contributed phenomenally in establishment of the team as a force to reckon with.

2014, year of inception, for this new-born team was all about baby steps taken by the team, but facing 2014 floods was more than baby turtles survival! It took only months for the club to emerge as one of the best teams in the state football and in 2014 the team emerged as Runners-up in State Football Championship Jammu.

It was in February 2015, the team made a mark on the national level when Lonestar Kashmir FC became the first professional football club from the state of Jammu and Kashmir to participate in a national league competition by participating in I-League (U-19) competition. The team emerged as Runners Up in I-League 2014-15 (2nd Division).

Year 2016 has been the most successful for the team during which the club achieved the feat of becoming the first team to beat the famous Mohammadan Sporting outside the state. The club also boasts of being the first team to have beaten Goan giants Dempo Sports outside the state during the same year. Besides seniors excellent performances, for the first time its U-16 team participated in the junior I-league, the legacy having been carried further in 2017 as well.

In fact, over these years, Lonestar Kashmir FC is credited of having introduced the I-league culture in the state, only carried forward by the other private professional football club Real Kashmir FC.

Talking on its vision for the club, Chairman Iftikhar says, “I aspire to see Lonestar Kashmir FC as a self-sustaining entity in the long-term, where we are able to reinvest the revenue flows into the game of football. The aim is not to run a profit making company, but a self-sustaining football club which is able to harness the talent of the state footballers. If the club performance well over the next 10-years, it shall be an achievement to have contributed to the game of football in the valley.”

With the induction of Fahd Khan as Managing Director of the club recently, Lonestar Kashmir FC is all set to be transformed into a complete professional club. On his plan of action, Fahd says, “I have recently introduced restructuring within the functioning of the team management with well-defined roles and responsibilities at all levels. I am myself handling procurement, event management and finances. Moreover, I am in-charge of the selection only to make sure that we get the best of the lot at every playing position irrespective of the background of the player. I do not entertain any influence.”

Regarding present activities of the club, Fahd says, “in addition to owning senior, U-18, U-15 and U-13 levels, the activities of the Lonestar Kashmir FC include conducting various football workshops across our State. The club is committed to promoting football as the number one game of the state and it envisions Lonestar Kashmir FC be in line with all top clubs of the country in future.”

In the process of evolution, Lonestar Kashmir FC has kept itself in the race of being one of the best professional club in the state by hiring a foreign coach namely Clebson Duarte Da Silva – Brazilian A-License coach – for a two-year term. Before joining Lonestar Kashmir FC, Clebson Duarte Da Silva was associated with Delhi United Football Club as Director. The newly appointed coach is the replacement to Head Coach Hial A. Parray who has retained his position as Head Coach, J&K Bank football team and also is on a short-term assignment of coaching Jamshedpur  FC (Juniors). For the current season, Da Silva is supported by the veteran Showkat Masoodi, who has had a phenomenal coaching career with J&K Forest FC. Till date, the results have not been favourable although.

At individual level, besides providing platform to in-service footballers like Waseem Feroz, Shanawaz etc. to play I-league, the club has helped the state identify raw talent of Aakif Reshi belonging to a remote place like Anantnag, to emerge as the fiercest striker of the state. Another local talent Dashyang Kachru groomed by the club has recently received an offer from Pune FC City. Moreover, Maharashtra born Farukh Choudhary and Asheer Akhter has found the club a launching pad of their glorious careers. While Asheer defended for Banguluru FC ‘B’ in 2017, Farukh plays as a striker with Jamshedpur FC.

For sure, the start of this season for Lonestar Kashmir FC has not been as good as the management would have expected, but the aim of the club remains to build an indigenous (all state players) I-league team, even if it comes at a cost of defeat. Winning would fascinate, but the larger goal would charm even more.

To conclude, from a bird’s eye view, the club with the span of 3-4 years has been quite successful in bringing about a drastic change in the standard of state football. And above all, Lonestar Kashmir FC has inculcated I-league culture in the state.