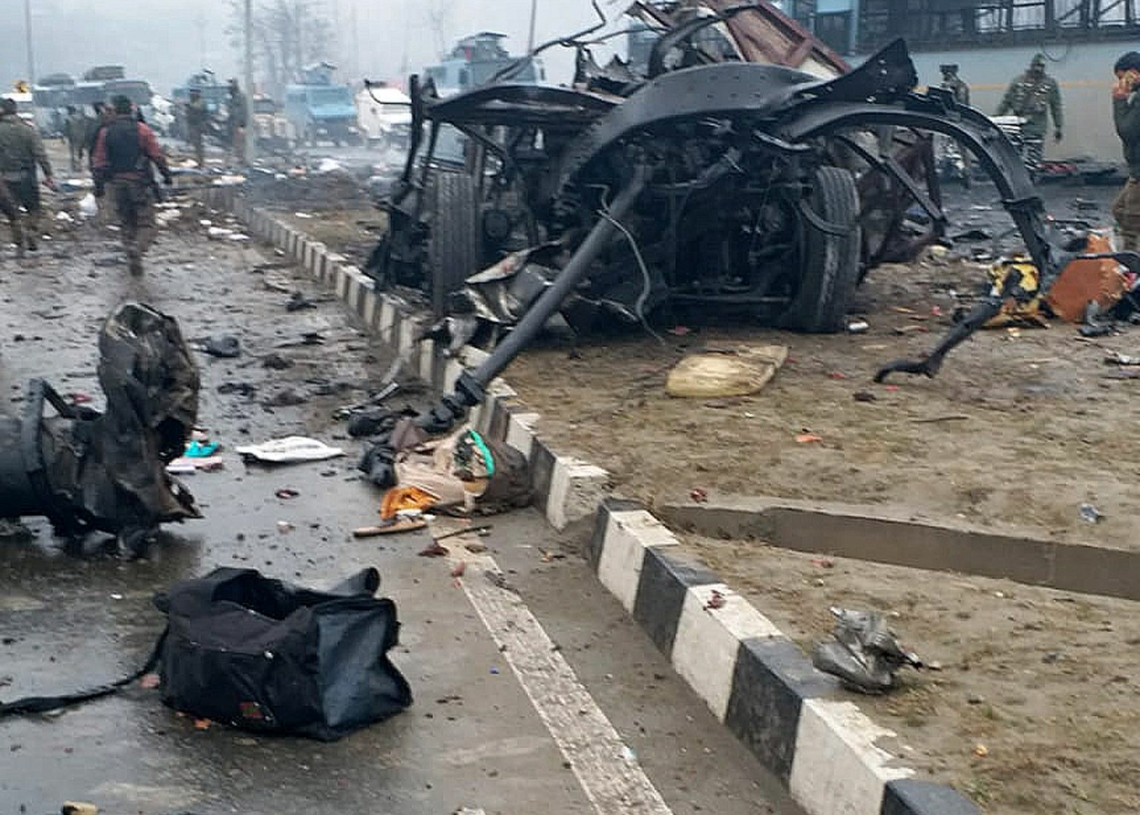 Srinagar, Feb 14: FORTY FOUR personnel of the paramilitary CRPF were killed and many others injured when a suicide bomber rammed a vehicle laden with explosives into a CRPF convoy on the Highway crossing through Lethpora area of Awantipora town in south Kashmir’s Pulwama district on Thursday.

It was the deadliest attack since the 2001 Jammu and Kashmir legislative assembly car bombing in which 38 people were killed.

The attack took place at around 3pm on the highway near Barsoo, a residential area of Lethpora, close to the saffron fields of Pampore.

The death toll kept on increasing with every passing hour after the incident as reports said that all those aboard the fateful 55-seater CRPF vehicle, which became the prime target of the suicide bomber, were killed in the attack.

Militant outfit Jaish-e-Mohammad in a statement to local media said their militant,Adil Ahmad Dar alias Waqas Commando, a resident of Pulwama, was the attacker who drove the car and carried out the suicide attack.

The bus was part of a convoy of 78 vehicles carrying over 2,500 troopers of the paramilitary force.

“A total of 44 CRPF men belonging to different battalions were travelling in the vehicle when the blast occurred,” a CRPF official said. The deceased, he added, belonged to several battalions.

Soon after the attack, gory scenes of dismembered bodies lying on the highway created chaos among both the civilians and the forces personnel in the area.

Following it, the traffic on the Srinagar-Jammu highway came to standstill. The government forces launched intensive searches in the entire area.

A police officer said forensic experts have taken samples even as investigations have been set into motion.

The officer also confirmed that Thursday’s attack was the deadliest.  “Even though there were major attacks in the past also like Badamibagh and Assembly but this is the first attack in which there has been such high number of causalities,” the officer said.

Regarding the vehicle used by the militant, the officer said that it seems it was either a ‘Scorpio’ or a ‘Jeep’.

“Investigations are underway in this regard,” he said.

IGP Kashmir SP Pani said that it was a “gruesome militant attack”.

“The investigations have been taken up. We have started gathering the sequences how this happened and the people behind it will be brought before the law,” the IGP said, adding, “We are ascertaining the chain of circumstances in this incident.”  (With inputs from GNS)