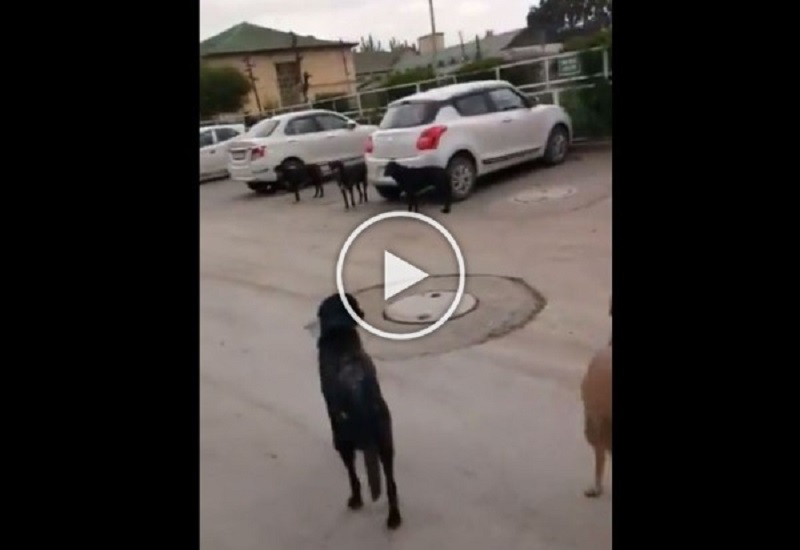 Stray dog menace has reached uncontrollable proportions in Kashmir. There is not a street or bylane where scores of these canines would not be found. Most of these dogs feast on the leftover from Kashmir kitchens as well as the protein-filled diet they get by hovering outside the chicken shops.

While Srinagar Municipal Corporation has been long claiming it is doing everything possible to curb the growing population of these canines, the ground situation remains grim.

Thousands of dog bite cases are reported to hospitals every year. However, now not even doctors are safe from stray dogs. In a video shared on Twitter, a man has highlighted how doctors have to face the threat while moving from the premises of the Government Medical College, Srinagar to the nearby SMHS hospital.

The video shows around a dozen dogs hovering around a garbage pit that is apparently set up inside the premises of the Government Medical college.

“The threat “braved” by our doctors while crossing from GMC Srinagar to SMHS Hospital,” the Twitter user wrote while sharing the video. The man in the video is seen dangerously walking through the bunch of dogs. “Live demonstration,” he says as the viewers see over a dozen dogs in the area.

“This menace is everywhere in city. Canines have overtaken every major road, risky to walk around,” wrote one Twitter user Showkat Malik.

“Not a place to get healed but get diseased. Sad state,” wrote another user Dr Tauseef Nissar.