Line of Control: ‘Fortress of Peace’ 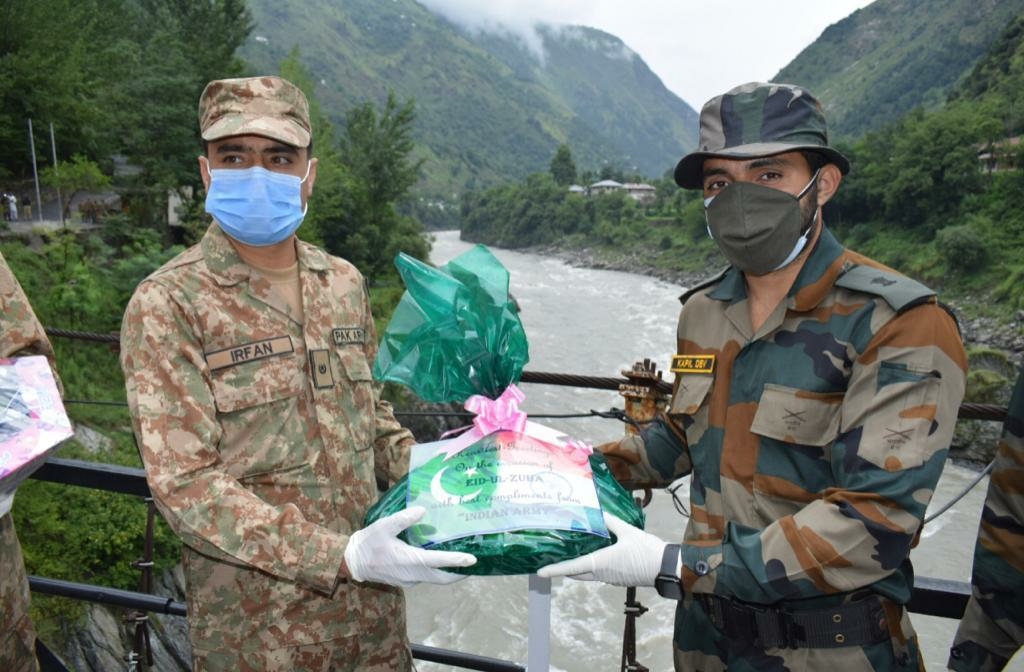 It was picture-perfect: Indian and Pakistan army officers posing together with flags of their countries flying high in the background. The occasion was Independence Day and the venue was the Line of Control (LoC). Both armies exchanged sweets and greeted each other on Independence Day. It was the icing on the cake that both army officers saluted each other before dispersing.

For the record, it is the same LoC that was drenched in blood a few months ago. Firing, shelling, blood, and gore was a usual scene on the LoC. Tension was always in the air and people were living under constant fear.

Come February 25, Indian and Pakistani armies agreed to defuse the tension and maintain peace on the sensitive Line of Control (LoC). The decision was taken after the Director Generals of Military Operations of both countries held discussions on the hotline. The two sides reviewed the situation along the Line of Control and all other sectors in a “free, frank, and cordial atmosphere”.

Both sides reiterated that existing mechanisms of hotline contact and border flag meetings will be utilized to resolve any unforeseen situation or misunderstanding.

It was for the first time after 2019 Pulwama attack and Balakote airstrikes that both sides have agreed to address each other’s “core issues and concerns which have the propensity to disturb the peace and lead to violence”.

Since the ceasefire was announced, there have been only six violations on the LoC and International Border. Union Minister of State for Home Nityanand Rai told parliament that while there were 380 incidents of ceasefire violations in January and 278 in February this year, there was not a single incident of ceasefire violation in March, just one in April, three in May, and two in June.

The minister said immediate and effective retaliation by the Indian Army and the BSF personnel is carried out during instances of unprovoked firings and ceasefire violations by Pakistan along the Line of Control (LoC) and the International Border (IB).

It is not the first time when the ceasefire was announced by both sides. In fact, the cease-fire on borders came into force on November 26, 2003, when the then Pakistani premier Zafarullah Khan Jamali announced a unilateral truce on all the three frontiers — 772 kilometer Line of Control (LoC), 192 kilometer International Border (IB) and 122-kilometer Actual Ground Position Line (AGPL) at Siachen glacier. New Delhi also responded positively and since then both armies decided to hold fire.

For the first three years, the ceasefire was more or less observed in letter and spirit by both countries. The border skirmishes started in 2006 and despite several flag meetings between local commanders, the firing did not stop. Around 15 Indian security personnel were killed in the ceasefire violations from 2009 to August 2012.

Figures presented in the parliament reveal that there were 5,133 ceasefire violations along the Line of Control (LoC) in 2020, in which 46 people lost their lives. Till January 28, 2021, 299 violations were reported on the LoC.

The number of ceasefire violations was three times more than that of 2017 when 971 cases were reported. In 2017, 31 people — 12 civilians and 19 security forces personnel — were killed and 151 others suffered injuries.

In fact, the 772-kilometer LoC has seen many upheavals. Beheadings, cold-blood killings, and infiltration became synonymous with the LoC.

In an RTI reply, the Ministry of Home Affairs (MHA) said over 2855 incidents of unprovoked cross border firing from Pakistan has occurred on Line of Control (LOC) and International Border (IB) from 2016 to July 2018.

More than 109 people including 35 army soldiers and 21 BSF personnel were killed while 565 people were injured including 302 civilians and 263 security force personnel in the cross border firing from January 2016 to July 2018.

Twenty-four security men including 12 army men and 12 BSF personnel were killed from January to July 2018. In 2017, 15 army men and four BSF soldiers were killed, while in 2016 eight army soldiers and five BSF men were killed in cross-border firing.

Hope for a thaw has now rekindled after both armies decided to give peace a chance. Nityanand Rai said the government’s consistent position has been that India desires normal neighbourly relations with Pakistan and is committed to addressing issues, if any, bilaterally and peacefully in an atmosphere free of terror, hostility, and violence.

“The onus is on Pakistan to create a conducive atmosphere by taking credible, verifiable, and irreversible action to not allow any territory under its control to be used for cross-border terrorism against India in any manner. India and Pakistan continue to maintain regular channels of communication through the respective High Commissions and other established mechanisms”, he said.