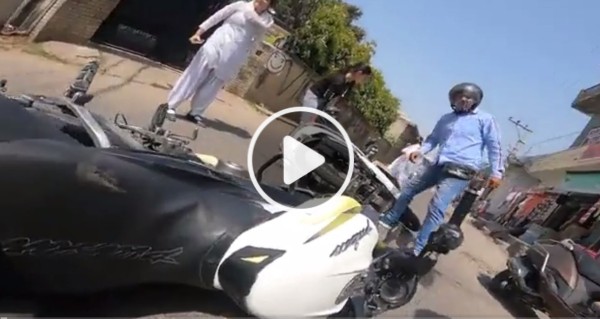 Teenagers riding two-wheelers are a common occurrence on Indian roads. It is completely reckless on part of the parents to allow such dangerous and illegal practice.

In a video proving the same, a teenage girl riding a scooty was involved in an accident with a biker.

The incident took place in Jammu recently with the biker suffering minor injuries. It could have been worse if he was not wearing a helmet. The biker was absolutely furious with the teenage girl, who looked in her early teens, and did not have a license. She was riding the scooty with a pillion, another girl who was wearing a school uniform.

The video shows the biker’s leg trapped under the Pulsar 220 as he asks the passersby to lift the vehicle. It seems he was wearing a Go-Pro on his helmet which captured the entire scene.

“Can’t you see? You need to look around you while driving. Girls are being given these scooties just like that?” the injured man asks her as he limps. “Do you have a license?” the man asks the girl who replies “No”.

“If you don’t have a license, how come are you on the road?” the man continues. Soon the public around starts to pacify the man with “Koi baat nahi (it is not a big deal).”

“What do you mean ‘Koi baat nahi’. She does not have a license. What if I had a head injury?” he tells the crowd who push him to let the girl go.

The girl then says “Sorry Bhaya, Sorry.” The man shows his bleeding hands and torn trousers as the public tells him that the girl is “very afraid”.

The girl finally leaves the scene with the man still furious about the incident and showing his bleeding hands to the public.

Here is the video (Strong language. Viewer discretion is advised).