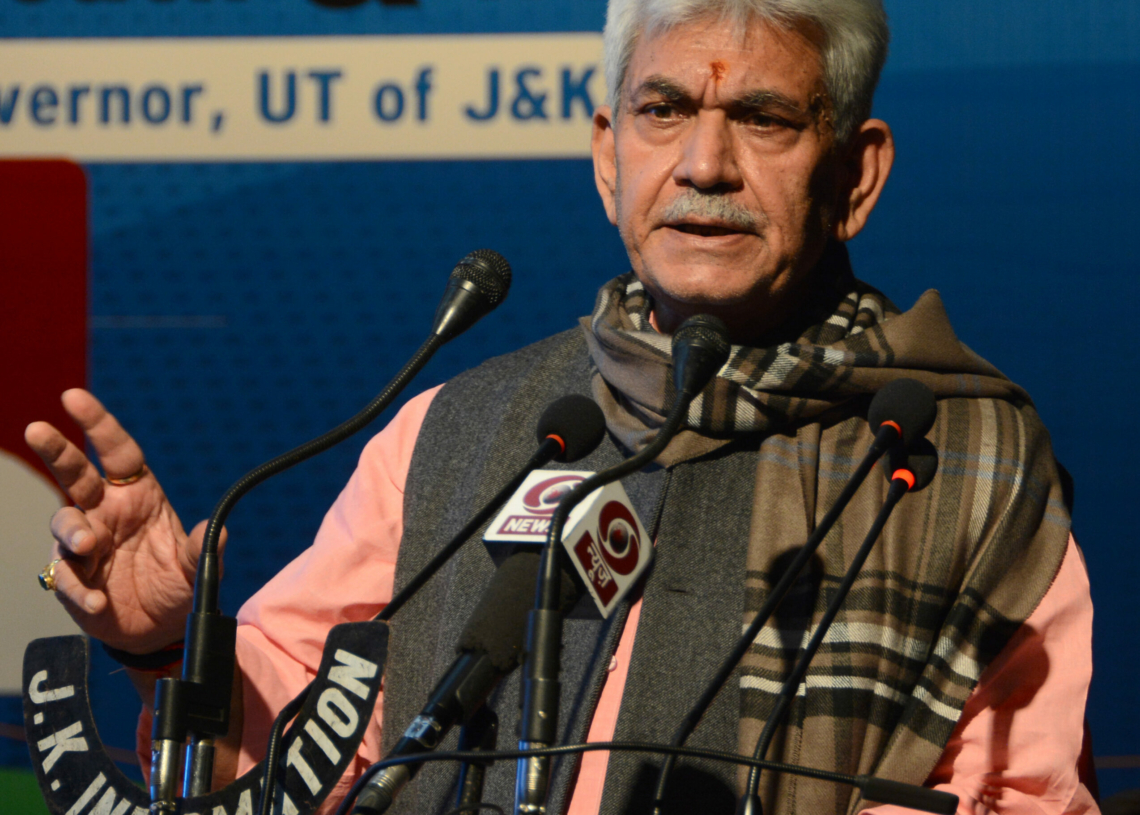 Srinagar: Lieutenant Governor, Manoj Sinha Tuesday announced the sanctioning of over 10,000 cases under B2V3 Self Employment Programme, Economic Package and My Town-My Pride.

The Lt Governor was addressing the media persons during a Press Conference at Raj Bhavan Auditorium here.

The Lt Governor’s press conference witnessed the announcement of some major reforms in the business sector, giving a determined push to the business revival and economic development of J&K, besides empowering youth and women entrepreneurs, making a positive impact on Self Employment.

He observed that his mantra for J&K revolves around 4 P’s viz Peace, Progress, Prosperity and People first. He said that the sanctioning of over 10,000 cases under B2V3 Self Employment Programme, Economic Package and My Town-My Pride highlighted the UT Government’s  commitment to empower the youth which is one of the foremost priorities of J&K Government.

A total of 15309 applications were received, out of which 10828 have been sanctioned and an amount of Rs 100 cr has been disbursed to 6734 applicants, identified under B2V3.

“We had taken up a target of covering at least 2 persons in each Panchayat who were in need of financial assistance for self employment,” he added.

“I am happy to announce that we have covered nearly 10,000 cases and in order to mark the occasion, one person from each district of J&K is being handed over a sanction letter here” said the Lt Governor.

“We stand committed to cover every single aspirant within the Union Territory of J&K, who wishes to set up his own business. What distinguishes the effort this time is the fact that unlike in past, where borrowers had to make several rounds of the bank to get a simple loan, the banks have been more than forthcoming towards helping the people,” he said.

The officers went to the villages under B2V3 and My Town My Pride, and identified the aspirants.

“The officers from the bank also attended these events and in a departure from the normal culture of red-tapism, we have been able to sanction these cases within a short period of time, which is reflective of our resolve to help the young generation in achieving their aspirations,” he continued.

The Lt Governor called upon the J&K Bank to not only extend financial assistance to these entrepreneurs but also provide handholding to them so that the youth who opt for self employment can set up sustainable businesses and flourish in their lives.

The Lt Governor also handed over a cheque of Rs 250 crore to J&K Bank as commencement of disbursement of 5% Interest Subvention and coverage of re-structured accounts of 2014 and 2016. He also termed it as very important milestone.

“This is only the beginning and as and when requests are received for further disbursement, we will continue to meet these requests in a timely manner,” he added.

Providing a much needed relief to the business community, the Lt Governor also announced that from 1st January, GST shall be reimbursed timely and automatically, without delays.

Reiterating Government’s commitment for taking comprehensive measures for the revival of the business sector, the Lt Governor observed that the committee had been constituted under the Chairmanship of KK Sharma, Advisor to the Lt Governor to suggest measures for improving competitiveness of local industry post abrogation of toll tax at Lakhanpur.

The committee was supposed to give its report within a month of announcement of economic package. I am happy to announce that the committee has given its report within the scheduled time and the Government will soon commence the implementation of recommendations, observed the Lt Governor.

“I believe that this is a comprehensive set of measures and these 20 measures are expected to go a long way in meeting the aspirations of local industry which have been looking for support from the Government,” he added.

“I had also said that the implementation of the package shall be personally monitored by me. I am happy to announce that nearly 50% of the recommendations have already been implemented,” he added.

These include: Interest subvention of 5% in case of all borrowers. The first tranche is being released today; 50 % waiver of the fixed charges of electricity/ water charges in respect of the Industries and Commercial Establishments for a period of 1 year; Release of Pending interest subvention under 2014 and 2016 rehabilitation schemes for restructured accounts, which is being done today; Constitution of committee for examining delay in payments to industries and suppliers; Re-structuring of functional NPAs as per RBI guidelines, the discussions with borrowers of the J&K bank have commenced and efforts are on;  Extension in date of filing of GST reimbursement claims up to 31st December, 2020; Streamlining of sanction of loans by bank branches; Extension of repayment schedule as per RBI guidelines;  Infusion of additional liquidity through GECL and business support loan; Rs.1700 crore to 47,000 borrowers. Holding of workshops related to capacity building under GeM in 20 districts, 8 districts already covered and 2 districts are being covered today; Special desk to facilitate youth and women entrepreneurs has been set up by the bank; Credit Card Scheme for artisans and weavers by enhancing the credit limit from Rs 1.00 lakh to Rs 2.00 Lakhs with interest subvention of 7% has already been approved;  Customised “Help Tourism” scheme by J&K Bank for financial assistance to persons associated with the Tourism Sector has been launched and further streamlining underway; Land bank exclusively for the establishment of Food Park clusters, 4 such clusters already identified. Soft loan to bakers for ovens; Land bank in the industrial estates for the establishment of the warehouses, J&K Bank has been accordingly instructed; Committee for regular stakeholders’ consultations has been set up; Streamlining of guarantors required for working capital loan; Conduct of Workshops to remove difficulties and delay in filing reimbursement claims, 8 districts have already been covered and 2 districts are being covered today;  Establishment of Consumer forums and Rationalization of restrictions on movement of manpower and material to Industrial Estates has been taken forward.

With all these innovative measures, we are progressing towards creating a better socio-economic ecosystem in J&K, and the implementation of the economic package shall be further intensified in times to come, the Lt Governor affirmed.

Strengthening the grass roots democratic set up, 3-tier Panchayati Raj System is being implemented for the first time in J&K, thereby giving further fillip to the developmental agenda centered around people’s welfare, he added.

“My Government is committed to peace and progress in J&K. As you have seen, we had announced the economic package about a month ago and we have been able to make progress on nearly 50% of the measures under the economic package. We mean what we say”, said the Lt Governor.

For empowerment of youth of J&K, the UT Government is coming up with YES J&K- a Youth Empowerment programme for Youth Engagement and Employment. The intended programme will be an institutional mechanism for providing the necessary handholding and support to the youth to facilitate and nurture their capabilities, he added.

The government is aiming to operate youth engagement programmes in the field of Sports, Livelihood generation, Recreation, Education, Counselling to effectively support and encourage young individuals to shape their future as per their aspirations, observed the Lt Governor.

On employment generation, the Lt Governor said that 24,000 posts have been identified in different departments, with 10,000 posts already advertised, across the UT for recruitment, which will be filled up soon.

We will continue to march ahead. We will spare no efforts to ensure that the Government of J&K comes up to the expectations of the people.

We stand committed to fast-tracking development in the Union Territory as per the dreams of our Hon’ble Prime Minister. We are committed to building a system based on values of transparency and accountability, he added.

As part of this endeavour, I take this occasion to mandate achievement of 100% DBT in all individual beneficiary schemes within two months, announced the Lt Governor.

The Lt Governor also held an interactive session with the media fraternity present there and answered their queries.