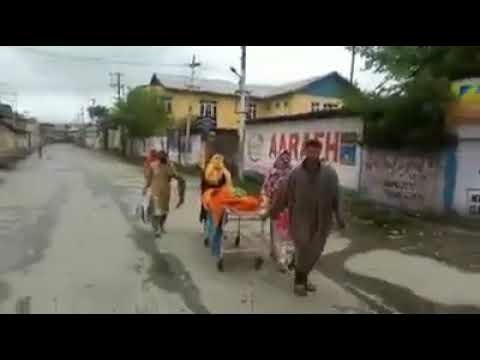 Srinagar:  Even as Kashmir has seen a few cases of pregnant women dying and losing their babies recently becuase of lack of timely medical intervention, a global research is warning that such deaths will increase in the next six months because of the disrupted health systems due to COVID-19 pandemic.

Three pregnant women have died in Anantnag earlier this month while delivering still born babies. Besides, as many as 13 pregnant women in Kashmir were tested positive for coronavirus in a single day last week.

The deaths of the pregnant ladies were due to administrative failure and disruption of healthcare triggered by COVID-19 pandemic, an issue that a recent study in Lancet Global Health Journal has researched on.

Published May 12, the study reveals that over the next 6 months, 1, 157, 000 additional child deaths and 56 700 additional maternal deaths are estimated to take place in addition to the mortality numbers.

That is an additional 6,000 children and 315 mothers dying every day from preventable causes over the next six months as the COVID-19 pandemic continues to weaken health systems and disrupt routine services.

The estimate is based on an analysis by researchers from the Johns Hopkins Bloomberg School of Public Health, newly published in The Lancet Global Health journal. Based on the worst of three scenarios in 118 low- and middle-income countries, the analysis estimates that an additional 1.2 million under-five deaths could occur in just six months, due to reductions in routine health service coverage levels and an increase in child wasting.

These potential child deaths will be in addition to the 2.5 million children who already die before their 5th birthday every six months in the 118 countries included in the study, threatening to reverse nearly a decade of progress on ending preventable under-five mortality.

Some 56,700 more maternal deaths could also occur in just six months, in addition to the 144,000 deaths that already take place in the same countries over a six-month period.

“Under a worst-case scenario, the global number of children dying before their fifth birthdays could increase for the first time in decades,” said UNICEF Executive Director Henrietta Fore. “We must not let mothers and children become collateral damage in the fight against the virus. And we must not let decades of progress on reducing preventable child and maternal deaths be lost.”

In countries with already weak health systems, COVID-19 is causing disruptions in medical supply chains and straining financial and human resources. Visits to health care centres are declining due to lockdowns, curfews and transport disruptions, and as communities remain fearful of infection. In a commentary to the Lancet report, UNICEF warns these disruptions could result in potentially devastating increases in maternal and child deaths.

The paper analyzes three scenarios for the impact of reductions in lifesaving interventions due to the crisis on child and maternal deaths. It warns that in the least severe scenario, where coverage is reduced around 15 per cent, there would be a 9.8 per cent increase in under-five child deaths, or an estimated 1,400 a day, and an 8.3 per cent increase in maternal deaths.

In the worst-case scenario, where health interventions are reduced by around 45 per cent, there could be as much as a 44.7 per cent increase in under-five child deaths and 38.6 per cent increase in maternal deaths per month. These interventions range from family planning, antenatal and postnatal care, child delivery, vaccinations and preventive and curative services. The estimates show that if, for whatever reason, routine health care is disrupted and access to food is decreased, the increase in child and maternal deaths will be devastating. The greatest number of additional child deaths will be due to an increase in wasting prevalence among children, which includes the potential impact beyond the health system, and reduction in treatment of neonatal sepsis and pneumonia.

According to the modelling, and assuming reductions in coverage in the worst-case scenario, the 10 countries that could potentially have the largest number of additional child deaths are: Bangladesh, Brazil, Democratic Republic of the Congo, Ethiopia, India, Indonesia, Nigeria, Pakistan, Uganda and United Republic of Tanzania. The 10 countries that are most likely to witness the highest excess child mortality rates under the worst-case scenario are: Djibouti, Eswatini, Lesotho, Liberia, Mali, Malawi, Nigeria, Pakistan, Sierra Leone and Somalia. Continued provision of life-saving services is critical in these countries.

In addition to the estimated potential rise in under-five and maternal deaths described in the Lancet Global Health Journal analysis,UNICEF said it was deeply alarmed by the other knock-on effects of the pandemic on children:

An estimated 77 per cent of children under the age of 18 worldwide – 1.80 billion out of 2.35 billion – were living in one of the 132 countries with stay-at-home policies, as of early May.

Nearly 1.3 billion students – over 72 per cent – are out of school as a result of nationwide school closures in 177 countries.

40 per cent of the world’s population are not able to wash their hands with soap and water at home.

Nearly 370 million children across 143 countries who normally rely on school meals for a reliable source of daily nutrition must now look to other sources as schools are shuttered.

As of 14 April, over 117 million children in 37 countries may miss out on their measles vaccination as the pandemic causes immunization campaigns to stop to reduce the risk of spreading the virus.