`Labbaik Allahumma labbaik’: Ghilaf-e-Kaaba to be changed on first Muharram 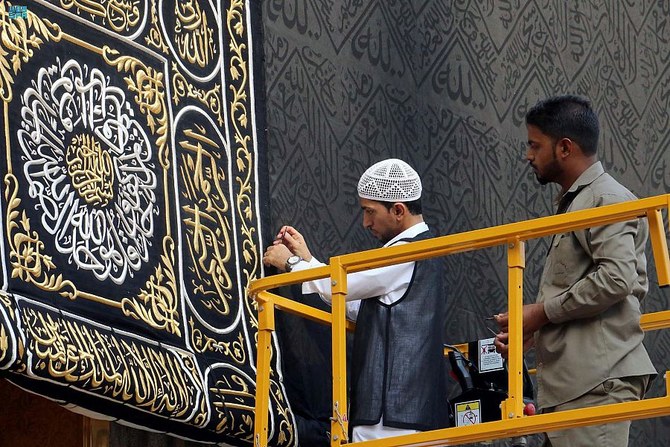 RIYADH: For the first time, Kiswa (Ghilaf-e-Kaaba) will be replaced on Saturday, the first day of Muharram

General Presidency for the Affairs of the Two Holy Mosques announced Kiswa will be replaced on Saturday to coincide with the beginning of the new Islamic year. Earlier, Kiswa used to be changed on the ninth day of Dhu Al Hijjah.

The presidency said 166 technicians and craftsmen will take part in the annual custom under the supervision of the head of the presidency Sheikh Abdulrahman Al-Sudais.

Al-Sudais highlighted the great care that the Saudi leadership takes to maintain the Kaaba.

Around 200 craftsmen and administrators work at the King Abdulaziz Complex for Holy Kaaba Kiswa in different sections including departments that deal with dyeing and automatic weaving, manual weaving, printing, sewing and assembly, and the belt and gold section of the Kaaba.

The sewing department houses the longest sewing machine in the world that has a length of 16 meters and operates with a computer system.

The upper third of it is a belt 95 centimeters wide and 47 meters long. Under the belt, there are Qur’anic verses written, each of them within a separate frame, and in the intervals between them there is a shape of a lamp on which is written “O live, O Qayyum,” “Oh, Most Merciful, O Most merciful.” “Praise be to God, Lord of the Worlds.”