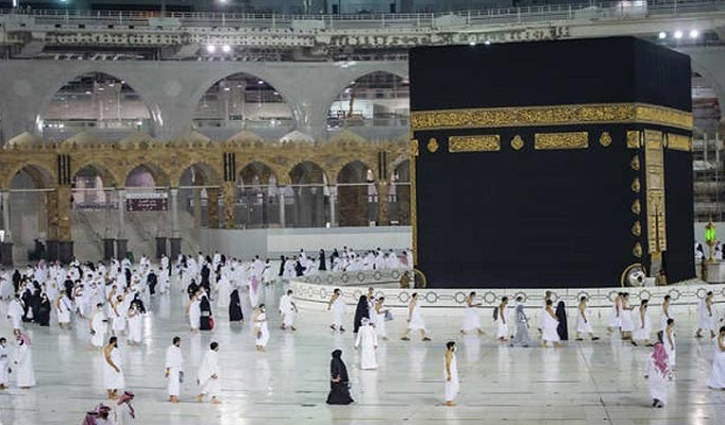 Riyadh: Saudi Arabia has urged Umrah pilgrims not to overstay and leave the kingdom before the expiration of their visas.

Ministry of Haj and Umrah warned that staying in the Kingdom after the expiry of the visa period is a clear violation of the applicable laws and regulations.

Earlier in October, the ministry announced the extension of the duration of the Umrah visa from 30 days to 90 days, during which period the pilgrim has the right to move freely throughout the kingdom of Saudi Arabia.

The Ministry of Haj and Umrah said comprehensive health insurance is a must for pilgrims. It should include coverage of treatment costs from infection with the emerging COVID-19, personal accidents that result in death or disability, flight delays or cancellations, and other matters. The value of the insurance policy should be 100,000 Saudi Arabian Riyals (SAR).

Saudi Arabia’s Ministry of Haj and Umrah said pilgrims across 176 countries have been issued visas since the beginning of the Umrah season on Muharram 1, 1444 (July 30, 2022).

Member of the National Committee for Haj, Umrah, and Visitation, Hani Al-Omairi, said that there are about 150 Umrah companies and institutions that provide the best services to the pilgrims from their arrival until their departure to their countries after performing the Umrah and visiting rituals with ease, Al-Arabiya.net reported.

Hani Al-Omairi stated that the countries most coming to perform Umrah are— Indonesia, Iraq, Turkey, Pakistan, Malaysia, India, and Azerbaijan.

He pointed out that the coming period will witness an increase in the number of Umrah pilgrims coming from different countries of the world.

General Presidency for the Affairs of the Grand Mosque and the Prophet’s Mosque said the number of pilgrims and worshipers reached more than 30 million during the first quarter of the current year 1444 AH, amid an advanced system of services that proceed with ease, and reassurance.

Earlier Saudi Minister Dr. Tawfiq Al-Rabiah clarified that it is no longer mandatory for women to travel with ‘mahram’ for Hajj or Umrah.

Minister made it clear that women from any part of the world can perform Hajj or Umrah without ‘mahram’.

On Umrah, he said that there is no cap on the number of visas. He also said that Muslims from any part of the world who come to the Kingdom on any visa can perform Umrah.

Saudi Press Agency (SPA) reported Minister of Haj and Umrah, Dr. Tawfiq bin Fawzan Al-Rabiah, revealed the extension of the Umrah visa from one month to three months, during his two-day official visit to Uzbekistan.

Al-Rabiah’s visit is an extension of the distinguished historical relations that bind the two countries and resulted in many agreements and cooperation in various fields and disciplines, including the Haj and Umrah sectors.

Children aged five and above can obtain a visa and are permitted to can accompany their parents to perform prayers inside the Grand Mosque.

On October 4, Saudi indicated that women can visit the Rawdah Sharif in the Prophet’s Mosque during the days, in two shifts, morning and evening.

Saudi Arabia has also asked Umrah companies to issue permits for its pilgrims seeking to perform the pilgrimage at the Grand Mosque and Prophet’s Mosque.

Saudi Ministry of Haj and Umrah said Umrah companies and institutions are also required to delegate their pilgrims to the Grand Mosque in Makkah according to the approved times in their permits.

This procedure includes those who wish to repeat Umrah during their stay in Makkah.

The ministry stressed the necessity of the commitment of Umrah companies and institutions to provide all packages of services to pilgrims to the fullest extent, with the aim of raising the quality of services in the sector, and facilitating the pilgrims’ journey, as per a report by Gulf Today.

The ministry reiterated that it closely monitors all services provided by all agencies and companies to ensure their quality.

The ministry stressed that it will not allow and will not tolerate any shortcoming that affects the service of the pilgrims, and that the ministry’s inspection and field teams are making continuous tours to assess and follow up on the quality of services provided to them.