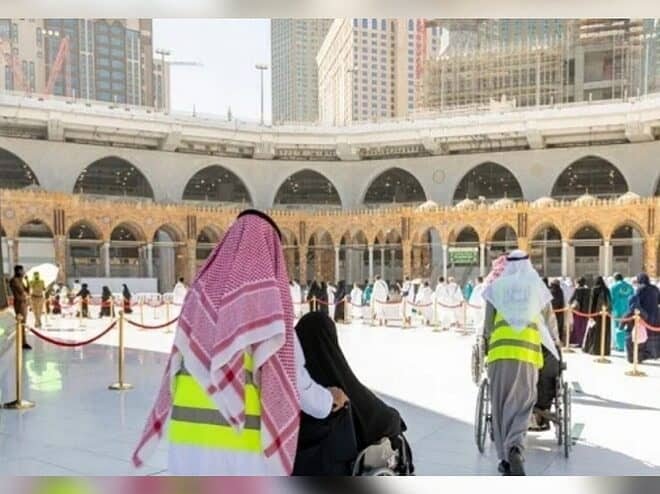 Riyadh: More than 30 million worshippers have benefited from volunteering services at the Grand Mosque in Makkah since the inception of the last Hijra year until the first quarter of the current year, Saudi Press Agency (SPA) reported.

According to figures released by Saudi Arabia’s Social, Volunteering, and Humanitarian Department, volunteers from 35 entities across 17 fields exerted a total of 1.2 million hours in serving around 30 million worshippers.

In the Prophet’s Mosque in Madinah, 7,000 volunteers served pilgrims over the past eight months.

Earlier, more than 2.2 million bottles of Zamzam water were distributed among devotees at the Prophet’s Holy Mosque in Madinah during the first quarter of the current Hijri year.

Saudi Press Agency (SPA) reported that the General Presidency of the Prophet’s Holy Mosque received 15,000 tonnes of Zamzam water and 13,128 tonnes was consumed.

Zamzam project was inaugurated in 2010 by the late King Abdullah to enable water distribution to pilgrims in the Two Holy Mosques in Makkah and Madinah.

Zamzam well is located in Makkah al-Mukarramah, 21 meters east of Kaaba. It has an ancient history dating back thousands of years. Being 30 meters deep, it holds a high spiritual value for Muslims who drink it, based on the hadiths of the Prophet saying that “Zamzam water is for what he drank.”

Earlier, over 12 million liters of Zamzam water were distributed among pilgrims at the Grand Mosque during Hajj 2022.

General Presidency for the Affairs of the Two Holy Mosques tweeted that the water was distributed for 15 days.

Abdulrahman Al-Zahrani, who manages the Zamzam water department at the mosque, said the total comprised 990,000 liters distributed in the form of 3 million 330ml bottles and 11 million liters from more than 25,000 water containers, each with a capacity of 40 liters.