`Labaik Allahuma Labaik’: Gilaaf-e-Kaaba to be handed over to senior keeper on Eid Al-Adha 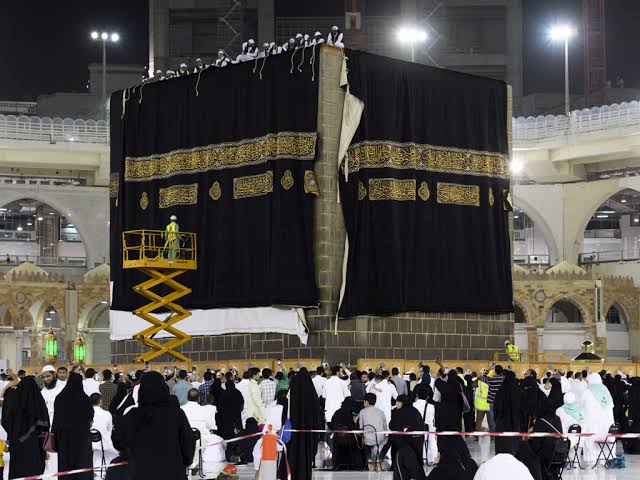 RIYADH: Come Dhu Al-Hijjah 10, Kiswa (Gilaaf-e-Kaaba) will be handed over to the senior keeper of Kaaba.

president of the General Presidency for the Affairs of the Two Holy Mosques announced.

The Kiswa will be handed over on the first day of Eid Al-Adha and a new covering will replace it on the first of Muharram, the beginning of the new Islamic year.

Sheikh Abdulrahman Al-Sudais said the Kingdom’s leadership is proactive in everything that raises the level of services provided at the two holy mosques, and that the utmost attention is paid to the Kaaba and its Kiswa.

He added that the Kaaba is draped in a new Kiswa every year due to the sanctity of the building.

On Sunday, the president announced that all preparations have been finalized to cover the Kaaba with the Kiswa this year.

The Kiswa is made from raw silk dyed black and is decorated with Quranic verses that are embroidered onto the cloth with gold-plated thread.

The cover was sewn at the King Abdulaziz Complex for Holy Kaaba Kiswa, in accordance with the highest standards, Al-Sudais said.

Al-Sudais also inaugurated a campaign to facilitate pilgrims’ access to Zamzam water during their Hajj rituals in Arafat.