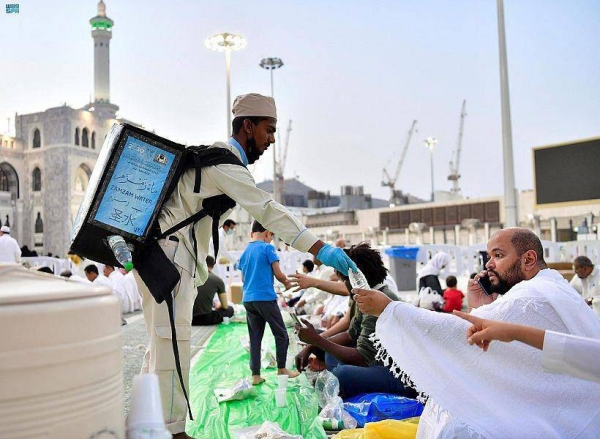 Saudi authorities have distributed eight million liters of Zamzam among the pilgrims at the Grand Mosque in Makkah during the first ten days of Ramadan.

The eight million liters were distributed in three million single-use bottles, and through 25,000 containers dotted around the mosque, 250 backpacks carried by employees, 58 smart carts with a capacity of 80 liters each, and 33 special carts each holding 100 bottles in the mataf areas.

Arab News reported that over 100 employees have been deployed to the various entrances of the mosque. Of whom, welcome visitors, manage crowd flow, and support security personnel in directing people from one section to another when praying areas reach full capacity.

The mosque has also been cleaned 100 times in the first third of Ramadan by 4,000 employees. Each time it was cleaned, 1,300,00 liters of disinfectant and 25,000 liters of fragrance were used.

Earlier, geologists had concluded that the Zamzam well, located just 20 meters to the east of the Kaaba in the Grand Mosque, maybe at least 4,000 years old.

Muslims believe it was built over the spring that gushed forth miraculously to relieve the suffering of Hajar and Ismael, the wife and infant son of the Prophet Ibrahim, who had been left alone in the desert at Allah’s command.

The 9th-century Sahih Al-Bukhari, regarded as the most authoritative of the collections of hadith recording the sayings and teachings of the Prophet Muhammad, relates how Hajar, searching desperately for water, ran seven times between the hills of Safa and Marwa before the angel Jibril appeared and caused water to flow from the barren ground.

According to the Saudi Geological Survey’s Zamzam Studies and Research Center, the name Zamzam “originates from the phrase Zome Zome, meaning ‘stop flowing,’ a command repeated by Hajar during her attempt to contain the spring water.”

Over time, the area around the well became a resting place for caravans, growing eventually into the city of Makkah, which in 570 CE became the birthplace of the Prophet Muhammad (SAW).