Kishtwar cloudburst: Day 6 of rescue, no trace of 19 missing persons 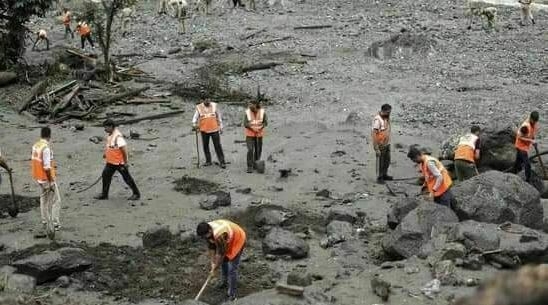 There is still no trace of the 19 missing persons even as rescue operations entered sixth day on Monday at Honzar village in Kishtwar district, which was devastated by cloudburst and subsequent floods on intervening night of July 27 and 28,

Success has been eluding the search teams after seven bodies were recovered and seventeen persons rescued in injured condition after the calamity last Wednesday.

Authorities say they inducted additional rescue teams of NDRF and SDRF for carrying out the rescue operation.

The police on Saturday also started a community kitchen to provide meals to affected people of village Hounzar. The police said to have erected tents to provide the temporary shelter at the site.

SSP Kishtwar Shafqat Hussain continues to camp there at the cloudburst-hit site to supervise the ongoing rescue and relief operations being carried out by JKP, NDRF, SDRF, Army and civil administration of district Kishtwar. (GNS)