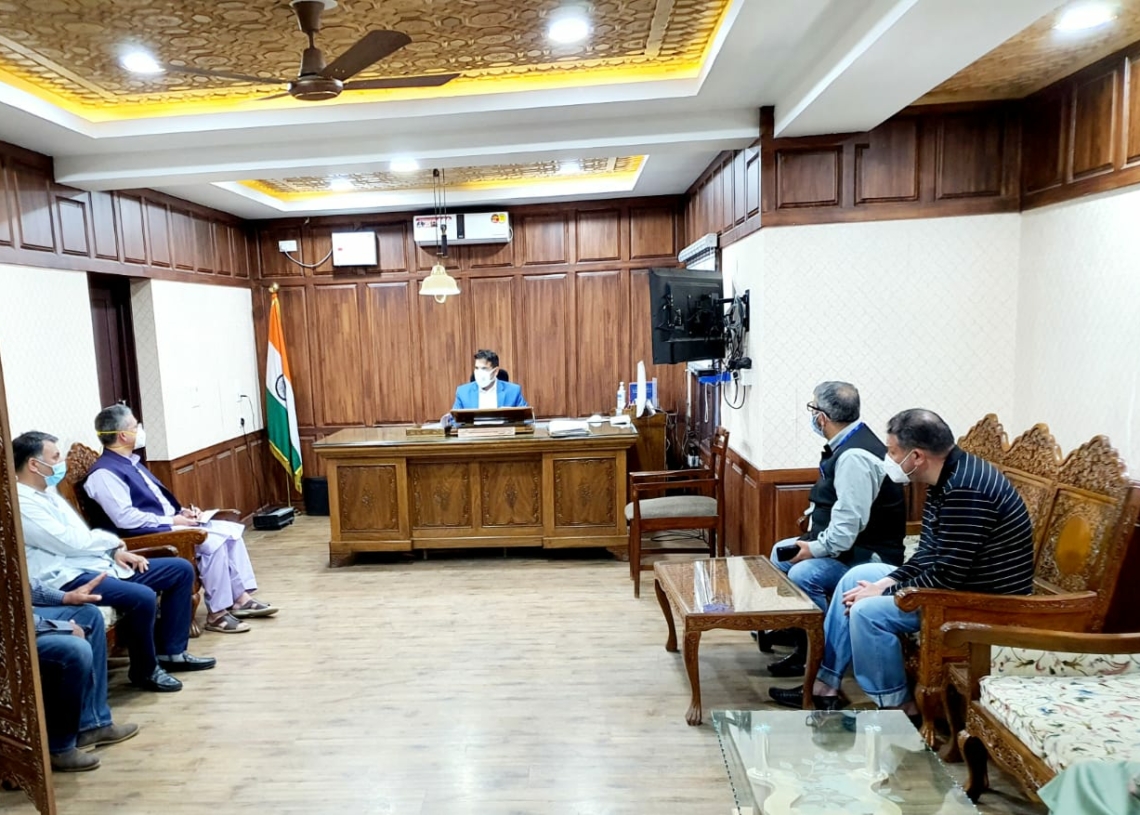 The meeting was a following up on issues regarding trade, commerce and industry raised in the interaction held with the Advisor to the Lt Governor, Baseer A Khan on 19 May.

In a statement, Tenga thanked the DDMA Chairman for taking the time to interact with the business community and understand the issues and problems being faced by them.

He provided suggestions for the weaker sections of persons connected with trade and commerce who required urgent assistance.

“The suggestions were well received,” KCCI said in the statement.

Wahid Malik stated that Restaurants and Café sector was facing a lot of difficulties due to the continuous lockdown.

He requested Chairman DDMA to consider allowing takeaway and home delivery activities for the Restaurants and Café sector.

He assured the authorities that COVID appropriate behaviour would be followed by the stakeholders.

The DDMA chairman stated that the Government was well aware of the issue and directions in this regard would be issued in a short time.

Malik further offered several suggestions with regard to Covid tests for tourists and vaccination for employees connected with the Hotel and Restaurant sector.

Aijaz stated that the Government was considering carrying out random tests in addition to fine tuning the RT-PCR test procedures so that minimum disruption is caused to tourists and Covid related protocols are also followed.

Abrar Ahmad Khan raised the issue of wholesalers, distributors facing problems in supplying goods to dealers. He requested the authorities to intervene for smooth movement of supply of essential goods.

He added that cash assistance of Rs 5,000 per month for drivers/cleaners belonging to the transport sector for the period of Covid lockdown needed to be considered.

He also requested that as was done last year, the Government may consider providing food kits for the vulnerable sections.

Afaq Sarwar stated that the pharma/FMCG distributors were also facing problems in delivery of goods and although Movement Passes had been assured but they had yet to be issued.

The DDMA Chairman issued directions for issuance of movement passes to the distributors for smooth delivery of the essential commodities and medicines.

Fayaz Ahmad Punjabi and Irfan Jeelani stated that the business community fully backed the administration in the fight to eradicate the Covid pandemic.

They stated that as stakeholders they were conscious of their responsibilities and would cooperate in this monumental and unprecedented fight.

They also requested the DDMA Chairman to give priority for vaccinating the owners and employees of business areas.

Aijaz appreciated the cooperation shown by the stakeholders and public and also issued on the spot instructions to the Chief Medical Officer Srinagar for preparing a systematic roster in consultation with the stakeholders for vaccination.

Ashaq Hussain Shangloo stated that the administration had allowed business establishments of open for two hours in Jammu and aeration of stocks.

He requested that a similar facility may also be provided to the shopkeepers here so that the stocks are not damaged.

With regard to the Memorandum submitted by JCCC to the Advisor, they stated that the operationalisation of the parking area being developed near Kothibagh Police Station also needed to be completed.

Nasir Hamid Khan invited the attention of authorities towards the semi-essential category of businesses like tyre shops/puncture repairs which apart from being a low-intensity activity with regard to footfalls and also belonged to vulnerable sections of the economy.

He further stated that since educational institutions were closed and students were mostly studying online, opening of limited stationary shops was also required. He thanked the Advisor and the Chairman DDMA for allowing home deliveries for departmental stores/supermarkets.

He drew the attention of the DDMA chairman towards certain logistic issues which this important sector was facing and would impede their operations.

The DDMA Chairman stated that the suggestions would be considered and necessary directions issued after consultations with health experts and reviewing the situation on ground.