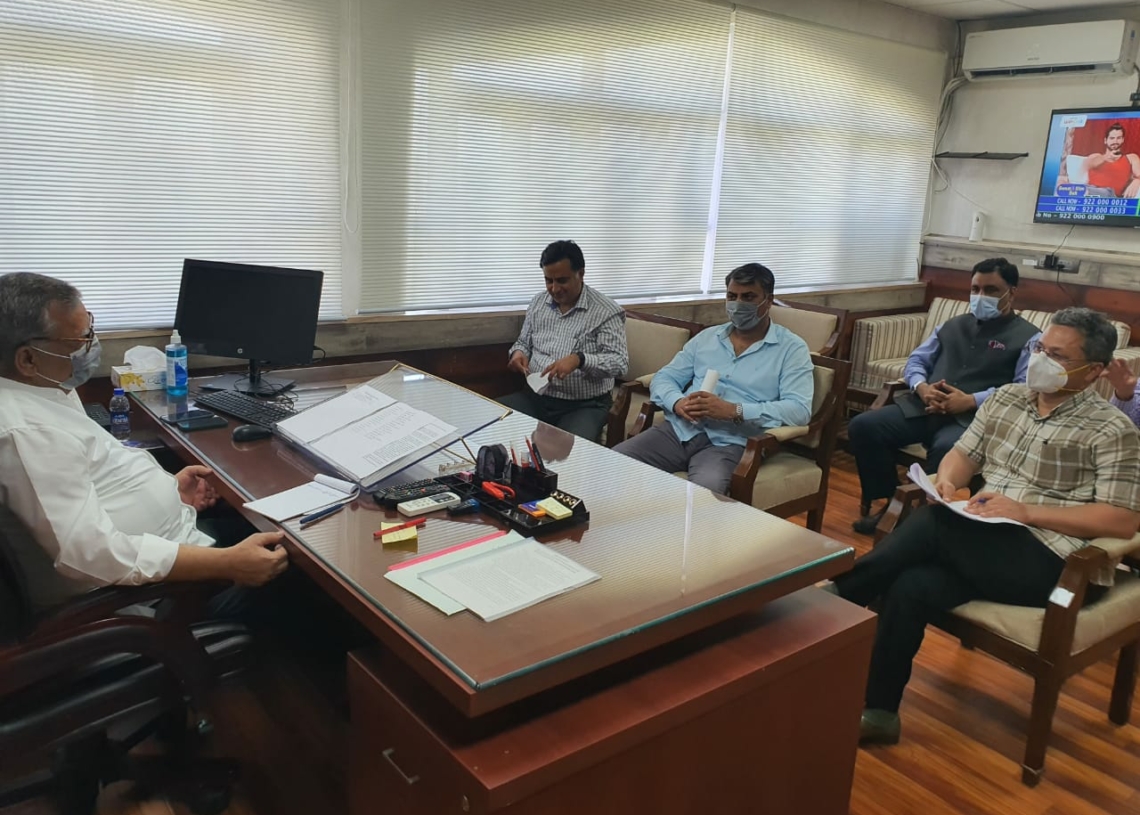 A delegation of members of the Kashmir Chamber of Commerce and Industry led by Javed Ahmad Tenga, Past President held a detailed interaction with Farooq Khan, Advisor to the Lt Governor, J&K in the Civil Secretariat on Tuesday.

Javed Ahmad Tenga thanked the Advisor for the formulation and implementation of several schemes and interventions regarding the horticulture sector like providing critical market linkages for the local produce by collaborating with the NAFED, subsidy for transportation of Cherry Crop and the operationalisation of Centre of Excellence for Horticulture at Khunmoh and airlifting of highly perishable horticulture produce to terminal markets.

He hoped that these and other interventions would provide much relief to the local stakeholders and would be having an long term impact. He also placed on record the appreciation of stakeholders for Naveen Kumar Choudhary, Principal Secretary Agriculture/Horticulture and Aijaz Ahmad Bhat, Director Horticulture and their team of officers who have worked hard for the formulation as well as implementation of the various policies and schemes on the ground.

Majid Aslam Wafai raised the problems caused by the import of Iranian Apples under the garb of Afghan Apples. A detailed paper in this regard was desired to be submitted. He also requested the Advisor to shift the focus of construction of new CA Stores to North Kashmir where the demand was huge and it would attract substantial fresh investments as well.

Javed Ahmad Tenga urged for market linkage tie-ups in the middle east and other countries. He also appealed that the administration needed to provide relief to the farmers whose fruits and crops were damaged in the recent hailstorms.

He said that they had been trying to get the PM’s Crop Insurance Scheme implemented in Kashmir but due to the lack of interest shown by the private insurance companies it has so far not been possible. He invited the Advisor to Lassipura and Aglar for an interaction with the local stakeholders.

The Advisor said that the Government was exploring the viability of installing Hail Nets and Shots till the time other protective measures are put in place.

The Advisor further stated that the NAFED intervention was directly beneficial for the farmers with a guaranteed price and offtake of their produce.

He said similar interventions through FCI for wheat in Jammu had shown good response with the purchases touching 21000 MTS and the farmers were quite satisfied. Regarding the establishment of new CA Stores, the Advisor stated the he was in touch with all the district heads for earmarking of land banks for CA Stores and said that the Government had a storage target of 40.00 lakh MTS in Kashmir.

Nasir Hamid Khan requested for the intervention of the Advisor for expansion of the permissible activities under the essential category list and strongly urged for the inclusion of bakeries, departmental stores/supermarkets and restaurants/café’s in this list. He stated that the limiting of operational hours of these sectors only resulted in deterioration in the quality of perishables and losses to the stakeholders.

Ashaq Hussain Shangloo raised the issue to dilapidated condition of roads leading to the Aglar Industrial Estate which impeded the movement of vehicles. He requested the Advisor for his kind intervention in this regard.

Umar Nazeer Tibetbaqal raised the issue of direct flights for Umrah travel as and when the restrictions were lifted. He stated that he had been in touch with the Saudi Airlines in this regard and if the required permissions are put in place it would give a boost to this sector.

The Advisor desired that since the necessary infrastructure with regard to Customs would not be available throughout, it would be better if the stakeholders identify a particular month so that necessary steps were taken. He also strongly urged for formulation of a supportive intervention for the registered Haj and Umrah companies who were undergoing the worse period despite being one of the emerging sectors in terms of revenue and employment generation.

The Advisor appreciated the inputs given by the members of the delegation and stated that in view of their knowledge about the sectors they represented it was very important that stakeholders should be in regular communication with the concerned authorities so that their point of view is also considered for formulation of policies.