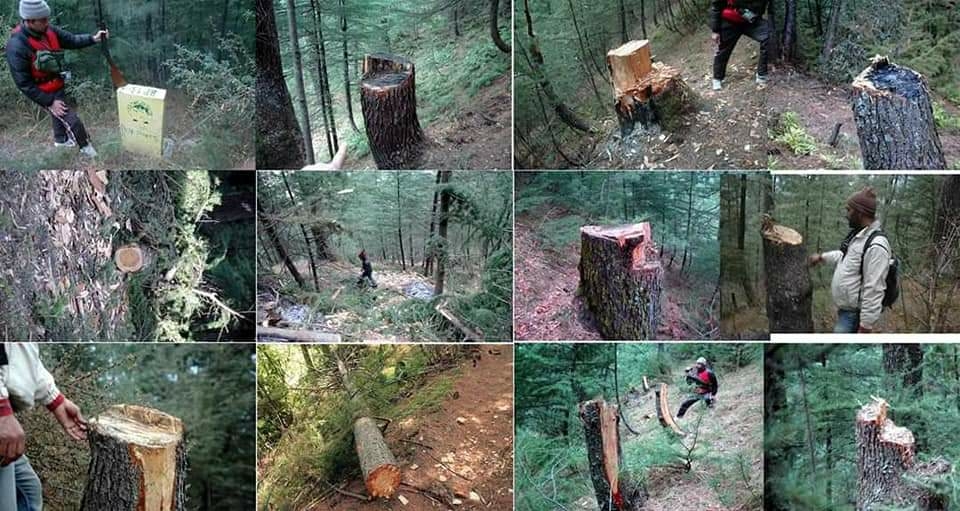 Srinagar: The Kashmir Chamber of Commerce and Industry Saturday flagged “major loot and plunder” of green gold in the forests of Kashmir and claimed that the forest department had miserably failed to stop it.

A spokesperson of the Chamber said that “thousands of deodar, fur or kail trees have vanished in thin air and logistics involved point to a major loot and plunder operation being in place.”

“Reports emanating from all other districts of Kashmir like Shopian, Kulgam, Bandipora, Baramulla, Anantnag, Ganderbal, Budgam, Kupwara point towards a flourishing timber smuggling operation which cannot exist without institutional patronage,” the spokesperson said.

Hundreds of trees, he added, were being chopped off every day and transported in a very organized manner by smugglers often armed using horses and trucks.

“The plunder is doing irreparable damage to forests and the lucrative profits seem to have drawn unscrupulous elements from all sections. Reports quote mind boggling number of smugglers active in the racket,” the KCCI spokesperson added.

The Forest Department, he said, has “miserably failed in posing any sort of challenge to these operations with serious allegations against many of them.”

“Neither has the Department been able to put in place effective mechanisms for protection of the forests. The smuggling has also received a shot in the arm because under the Indian Forest Act which has been extended to Jammu and Kashmir it is a bailable offence. The Public Safety Act which was originally introduced in the 1980’s to book timber smugglers is no longer applicable to smugglers because of the scrapping of the Jammu and Kashmir Forest (Conservation) Act, 1997 after the J&K Reorganisation Act, 2019 came into effect in October, 2019,” he added.

Between August and October, 2019 the Forest Department, as per KCCI, has filed 59 cases of alleged timber smuggling.

“But habitual offenders seem to be somehow operating without much bother,” the spokesperson said.

The Chamber has urged Lt Governor G C Murmu to take strict action against officials of the concerned departments for “failing to take preventive action”.

“The Government should not shy away from even dismissing senior officials from service for criminal misconduct and gross negligence. Heads need to be set rolling without any delay to demonstrate the seriousness of the Government to put an end to this menace,” the spokesperson added.

KCCI suggested constitution of a high level Task Force to be headed by a senior functionary.

“In order to initiate effective and conclusive action, the Chamber recommended that the Task Force be headed by a person of “impeccable integrity and experienced in investigative police work”.

“The Task Force is needed for creating a sustainable protective cover for our forests against the flourishing timber mafia,” the spokesperson added.

Meanwhile, the Chamber commended the efforts put in by Dr Raghav Langer, Deputy Commissioner, Pulwama to bring focus on the loot and plunder of forests by the timber smuggling mafia.

“The day long field visit to Sangerwani forests by Dr Raghav and his team which included long treks into deep forests and using modern technology like Drones to inspect the areas deserves appreciation indeed,” the spokesperson added.