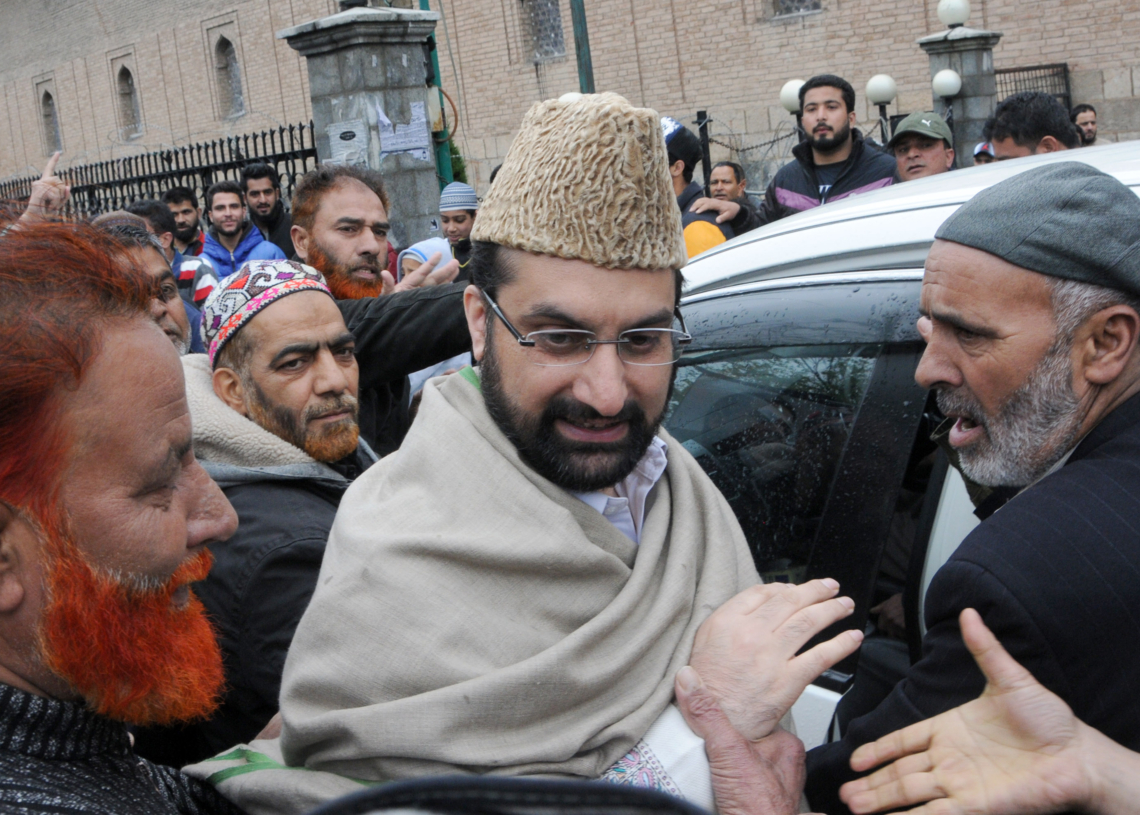 Srinagar: Chairman of Hurriyat Conference Mirwaiz Umar Farooq interacting with people after he was released from house detention,at Jamia Masjid in Srinagar on Friday. PTI Photo by Umar Ganie

Srinagar, Apr 20: Demanding exemplary punishment to the guilty involved in the gruesome rape and murder of minor girl of Kathua, Chairman Hurriyat (M) Mirwaiz Umar Farooq Friday said all the rape cases that took place in Kashmir since past three decades should be reopened and reinvestigated including the mass rape of Kunan-Poshpora so that guilty, who continue to remain scot free, are brought to book.
Addressing the Friday congregational gathering at the historic Jamia Masjid, Mirwaiz urged world human rights bodies to raise their voice against the brutal rapes and murders of Kashmiri women and to ensure justice is delivered as they did in the case of the eight year old girl victim in Kathua rape and murder case.
Mirwaiz who was allowed to offer congregational Friday prayers at historic Jamia Masjid in Srinagar took to micro blogging website Twitter. “At #JamaMasjid.While today there is a global outrage and demand for #JusticeForAsifa,Kashmir equally demand justice for the hundreds of rape victims since 1990 including #Kunanposhpora #ChakSaidpora #Pazipora #Shopian, #Badasgaam# #Balipora and many others where abhorrent #Rape, he wrote on Twitter.
In another tweet Mirwaiz said: “…was used as a means to repress incite fear and intimidate people into submission of the perpetrators nefarious agenda/ design. We demand REOPEN all cases ASAP!”.
Mirwaiz said the rape and murder of eight year old girl child shook entire world and at the same time the incident has refreshed our old wounds and reminded Kashmiris of many similar brutal mass rape and murders committed here by the forces who continue to roam freely.
Mirwaiz said that the rape and murder of minor in Kathua was premeditated.
“Its aim was to push and evict bakerwal community from the area by instilling fear among them the way Kunan Poshpora act was committed to force entire Kashmir population into submission,” he said.
“While on one hand people of JK are demanding stern punishment to the culprits of minor Kthua girl, at the same time we demand reopening of all rape and murder cases since 1990 and to bring culprits to book after investigations,” he said.