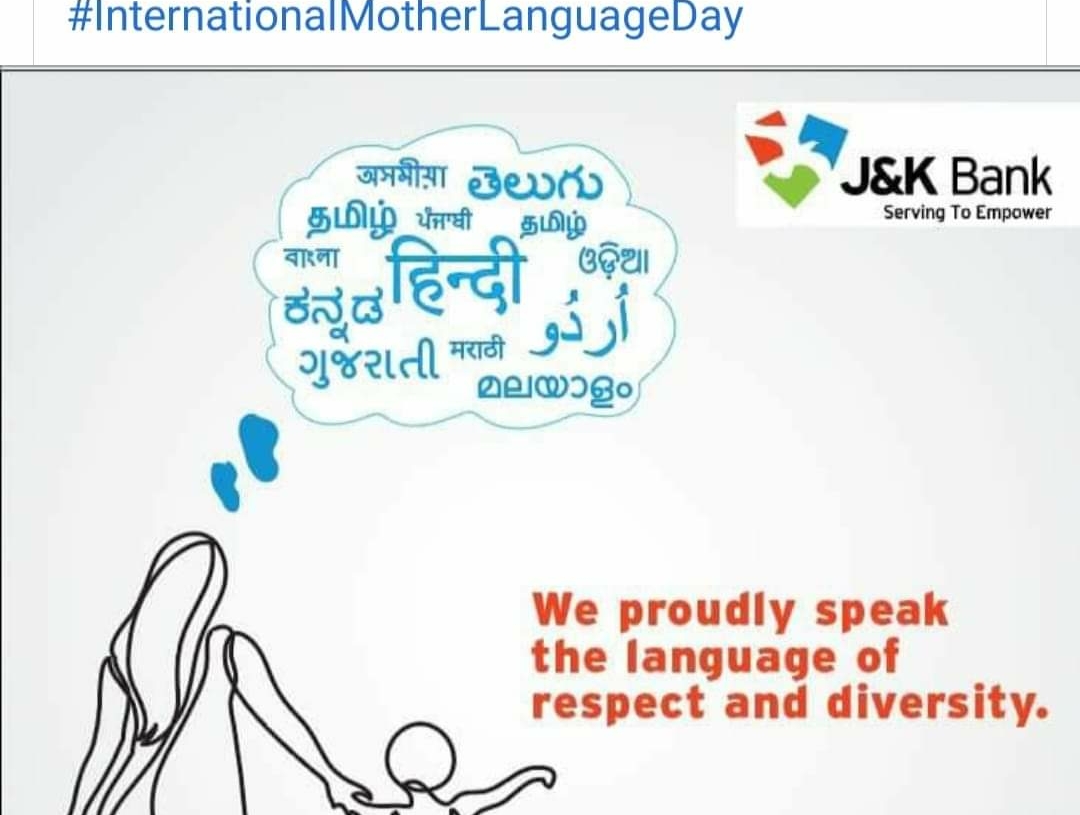 Srinagar: J&K Bank faced a PR disaster on Sunday after it excluded Kashur and Dogri from its poster about the International Mother Language Day triggering a social media backlash that forced the organisation to make amends.

The bank’s public relations team made a mess of the Day as it kept adding the ‘forgotten’ languages to the poster it updated twice.

The initial poster showed a sketch of a mother walking her child with an animated thought-cloud listing a number of languages. Interestingly, Kashmiri and Dogri, the two major languages spoken in J&K, a region that the Bank represents, were missing in it.

The caption underneath read: “We proudly speak the language of respect and diversity.”

As soon as the poster was released on social media handles, netizens in Kashmir bombarded the bank for “deliberately” skipping Kashmiri language from it.

“They should apologise publicly on social media for such a blunder,” commented a user on Facebook.

Adbee Markaz Kamraz, a federation of literary and cultural organisations in Kashmir, took a strong note of the goof-up.

“As President Adbee Markaz Kamraz, I strongly condemn the discriminatory attitude of J&K Bank functionaries. By doing so they have demonstrated their sick mentality. We will not take it lying down. By blacking out a language that is spoken by eight million people in J&K; is a language recognised in 8th schedule, is the official language of J&K, they have only reduced their own consistency and played with emotions of hundreds and thousands of their clients (sic),” wrote Amin Bhat on his Facebook handle.

Journalist Gowhar Geelani tweeted: “Essentially, on international day of Mother Tongue, J&K Bank has telegraphed this message to the people of Kashmir: We respect diversity and all languages except the language of the native Kashmiris. If this is not cultural aggression & insult to the identity of Kashmir, nothing is.”

Another Twitter user, Faheem Aslam reacted: “J&K Bank has only brought itself disrepute by ignoring Kashmiri language in its promotional advertisement pertaining to International Mother Language Day. It runs contrary to its message of “respecting every language”. So, in a way, it has become ‘World Shame Day for J&K Bank’ .”

A Facebook user wrote: “Who says it is Kashmir Bank. This Bank has always helped others not Kashmiris. They have drained every drop of blood from our veins in the shape of interests on meagre loan borrowings. They have no sympathy with Kashmiris not to talk of Kashur zabaan. Their past has been anti-people, present exposed now and future unpredictable.”

Sensing the internet storm their flawed poster triggered, the Bank soon changed the poster and added Kashur in it.

The Bank again updated its poster and included Dogri in the languages. But it was already too late, and the change attracted more ridicule from the netizens.

“Kaeshir added now. Pressure’as manz aewa. Besharm (You felt the pressure. Shameless),” wrote a user after the Bank made the changes.

Whether the bank made a blunder or intentionally ignored the two languages could not be verified immediately.

However, many netizens questioned why the bank came up with the poster in the first place as it rarely commemorated such events and days in the past.