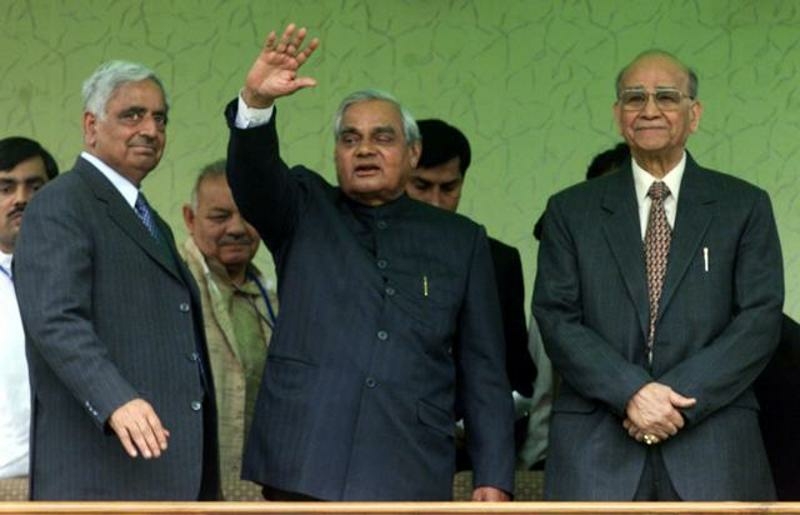 Srinagar, August 16: With his mantra of ‘Insaniyat, ‘Jamhooriyat’ and ‘Kashmiriyat’, former prime minister Atal Bihari Vajpayee endeared himself to the people of Kashmir who finally saw a leader willing to look beyond political calculations in his attempt to solve the vexed problem of the strife-torn valley.
People of the valley vividly remember Vajpayee as the man, who despite his Jan Sangh past, extended a hand of friendship to Pakistan and offered dialogue to the separatists in a historic speech here in April 2003.
“We are again extending the hand of friendship, but hands should be extended by both sides,” Vajpayee said, the first such initiative by a prime minister of the country in many many years following the eruption of militancy in the state.
The ‘hand of friendship’ to Pakistan was a complete reversal to the earlier stand of his government of not engaging with Islamabad till cross-border terrorism continued.
At the same rally, Vajpayee extended an olive branch to the separatists saying dialogue was the only way to resolve issues.
The sincerity of the effort immediately elevated Vajpayee’s stature in the eyes of the common Kashmiri, who bore the brunt of decades of violence in the state.
Days later, Vajpayee elaborated on his Srinagar speech in the Lok Sabha.
“Issues can be resolved if we move forward guided by the three principles of Insaniyat (Humanity), Jamhooriyat (Democracy) and Kashmiriyat (Kashmiri values),” he said.
The peace overture was all the more a surprise as it came just over two years after the Parliament was attacked by Jaish-e-Mohammad militants.
Vajpayee had, however, made efforts to foster friendly relations with Pakistan, earlier as well.
He travelled to the neighbouring country in the inaugural Delhi-Lahore bus in 1999, the efforts of which were negated by the Kargil intrusion later that year.
Senior PDP leader Naeem Akhtar said Vajpayee had become a reference point “in Kashmir and about Kashmir”.
“His electoral loss in 2004 (Lok Sabha polls) is considered a loss for Kashmir and south Asia. He was one PM who bonded with the sentiments of Kashmiris and scripted a new peace agenda for south Asia, establishing in the process the centrality of the sentiment of the people of Kashmir and that Kashmir can be resolved without the use of force and without redrawing borders,” Akhtar told said
CPI(M) leader Mohammad Yousuf Tarigami said Vajpayee had tried to reach to the people of Kashmir by initiating important initiatives which helped in creating hope.
“Opening of dialogue with stakeholders including Pakistan and other dissenting voices were meaningful steps,” Tarigami said.
The groundwork for the opening of trade and people-to-people contact across LoC were seen as major confidence-building measures.
“Despite severe limitations of the BJP’s policies, he will be remembered for not following the beaten tracks,” Tarigami asserted.
Not just politicians, even the man of the street in Kashmir is full of admiration for the former prime minister.
“While every Prime Minister in India has always worried about the next election and used Kashmir as an issue to win the polls, Vajpayee was different as he made sincere efforts to initiate a process that could lead to a resolution,” Abdul Rehman Khan (75), a retired government employee, said.
Often Vajpayee’s out of the box thinking surprised even the Pakistani establishment.
Reacting to his unexpected ‘hand of friendship’, the then Pakistan Foreign Minister Khurshid Mahmud Kasuri said he was hopeful that there will be no “clarification” from India or even from Vajpayee on the statement.
Kasuri had said he was “thrilled” over the development and termed Vajpayee’s statement as a positive movement forward in India-Pakistan relations.