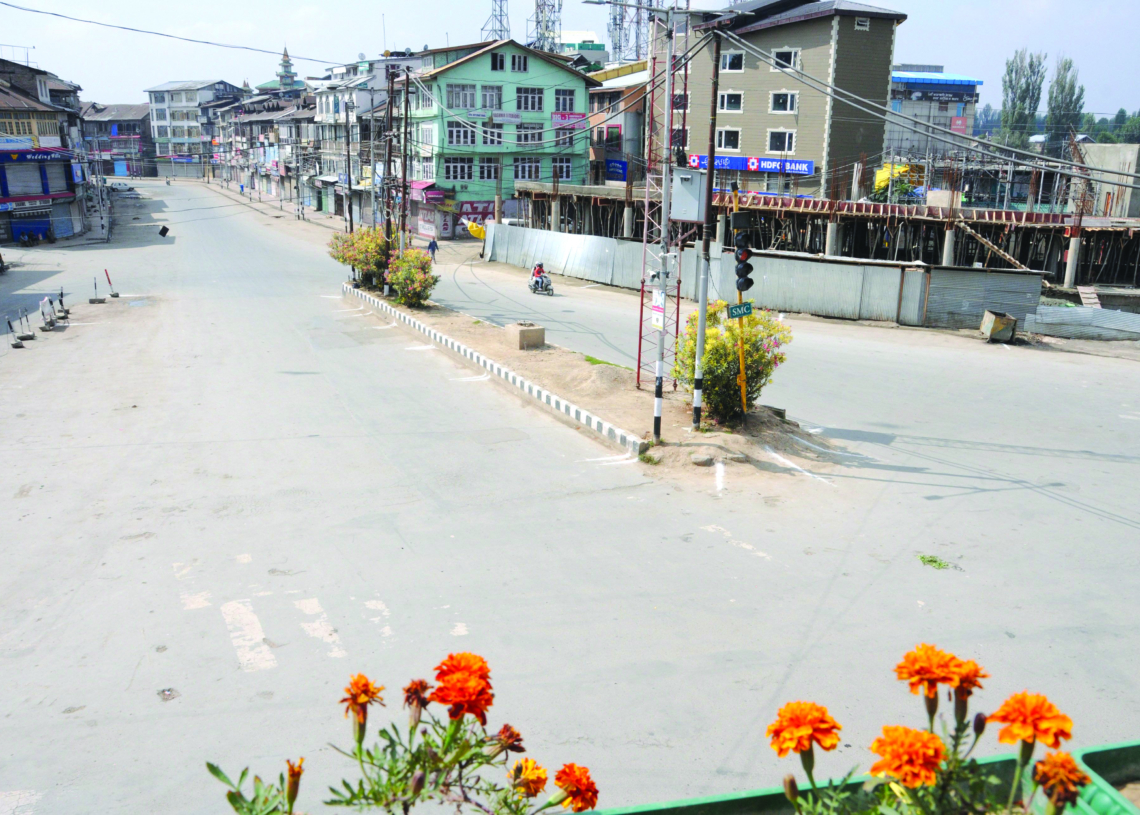 Srinagar: A view of deserted streets during strike called given by joint hurriyat leadership on the 72nd Independence Day,in Srinagar on Wednesday, August 15, 2018. PTI Photo by Umar Ganie

Srinagar, Aug 15: The district administration Srinagar imposed restrictions in Srinagar areas on Wednesday while as a complete shutdown was observed on August 15 across the Valley amid official I-Day functions held in all the district headquarters.

The shutdown call was given by the Joint Hurriyat Leadership compromising Syed Ali Geelani, Mirwaiz Umar Farooq and Muhammad Yasin Malik, appealing people to observe the day as ‘black day’.

Local sources said that heavy contingents of police and paramilitary CRPF troopers were deployed in the sensitive areas of Old City here to thwart any protests by the people on the day.

The authorities had imposed restrictions in Srinagar areas including falling under the jurisdiction of scores of police stations.

Besides, the security was also put on high alert around SK Stadium here where the main I-day function was held today.

Following the call given by Joint Hurriyat, all the shops, business establishments, petrol pumps and educational institutes remained closed throughout the day while as the vehicular movement was also thin on the roads.

Mobile telephony and Internet services were suspended early morning and resumed in the afternoon. An official said the step was taken “as a precautionary measure” to prevent spread of rumours and triggering of IEDs by the militants.

Soon after the culmination of I-day functions across the Valley especially at SK Stadium where Governor N N Vohra unfurled the tri-colour, the services restrictions around the main venue was removed while as the mobile telephony and internet services were also restored.

Besides, in wake of the shutdown call, the authorities had also suspended the train services in the Valley as “a precautionary measure”.

The Government of Jammu and Kashmir has initiated action against officials of the cultural academy for a technical fault in the audio system at the I-Day function at Sher-e-Kashmir stadium in Srinagar on Wednesday.

The audio system broke down during a cultural programme at the function which was presided over by Governor N N Vohra, eyewitnesses said.

Reports said that Divisional Commissioner Kashmir, Baseer Ahmad Khan has initiated action against officials of the cultural academy for technical fault in the audio system during the cultural programme proceedings.