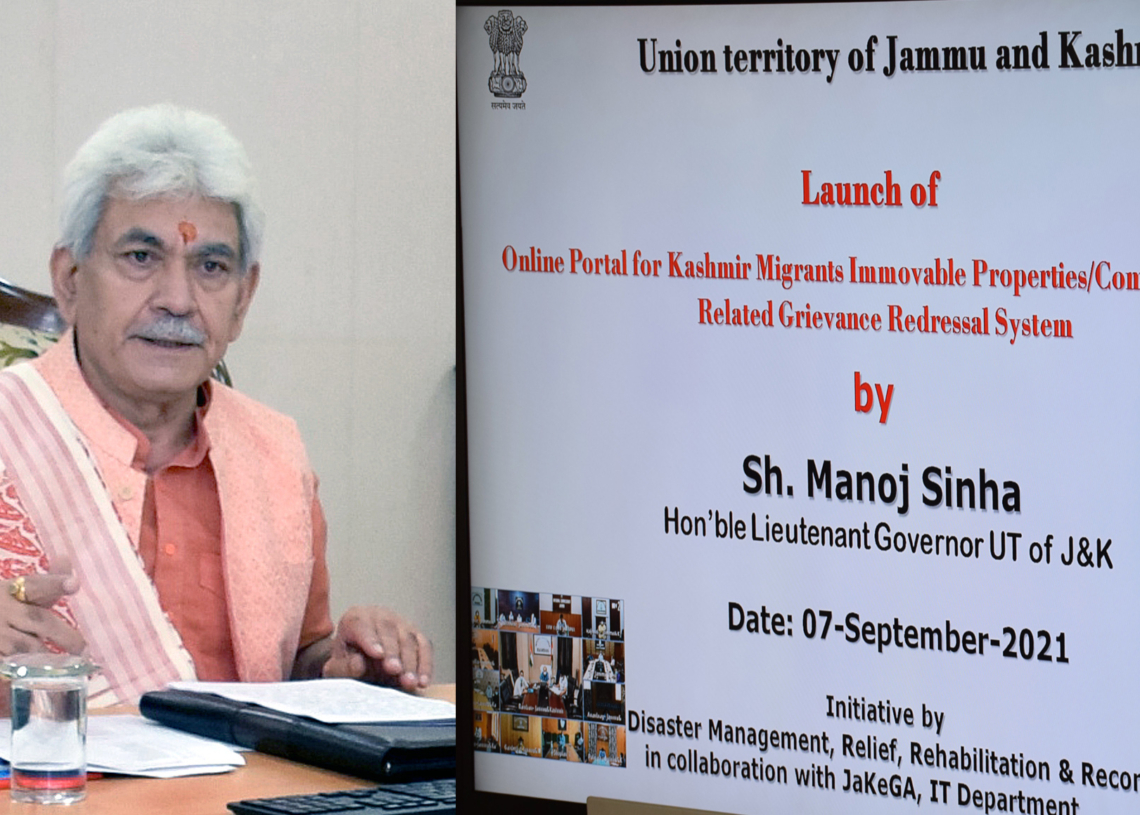 This initiative will put an end to the plight of the Migrants who have been suffering since 1990s: LG

The Kashmir Migrants can log in to –http://jkmigrantrelief.nic.in/ or http://kashmirmigrantsip.jk.gov.in to submit their complaints.

The application filed on the portal will be disposed of in a fixed time frame under the Public Services Guarantee Act, 2011 by the revenue authorities under intimation to the applicant.

The competent authority (Deputy Commissioner) shall undertake survey/field verification of migrant properties and update all registers, within a period of 15 days and submit compliance report to the Divisional Commissioner, Kashmir.

Speaking on the occasion, the Lt Governor said this initiative will put an end to the plight of the migrants including Hindus, Sikhs and Muslims, who have been suffering since the 1990s.

“I met numerous delegations from across the religion in the last 13 months and they unequivocally supported the return of migrants,” added the Lt Governor.

“It is the responsibility of the present to rectify the mistakes of the past. While laying the foundation for a bright future, this is also the time to heal the old wounds. I request all citizens to support the administration in this effort and set a new example of brotherhood”, the Lt Governor said.

“The initiative is a result of the Good Governance practices of the UT Government. We are working with greater responsibility to establish the Rule of Law and create an ideal harmonious society reflecting the true essence of Kashmiriyat,” said the Lt Governor.

Nearly 60,000 families migrated from the valley during the turmoil, out of which approximately 44,000 migrant families are registered with Relief Organisation, J&K, whereas, rest of the families chose to shift to other States/UTs. The hapless migrants had to leave behind their immovable as well as movable properties.

The violence has affected all. Out of those 44,000 migrant families; 40,142 are Hindu Families, 2684 are Muslim Families and 1730 belongs to Sikh community, the Lt Governor added.

“During the trial run period of the portal, we have received 854 grievances. It clearly shows a large number of migrant families were awaiting justice. Now, the time bound action on complaints will not only restore the faith of people in the system but I believe thousands of families achieve closure, justice and regain their dignity,” the Lt Governor said.

“It is pertinent to mention that with the onset of the Pakistan-sponsored terrorism in Jammu and Kashmir in the year 1989-1990, a large number of people had to migrate from their ancestral places of residence, particularly in Kashmir Division. There was mass exodus of Kashmiri Hindus as well as a number of Sikhs and Muslims families. Under compelling circumstances, the immovable properties of these migrants got either encroached or they were forced to sell their properties at throwaway prices,” read the official statement by the government.

Under this Act, the concerned District Magistrate was designated as a Custodian of the migrant properties. The Act provides for certain restrictions to prevent distress sale, custody of immovable property, eviction of unauthorized occupants, implementation by the competent authority, etc.

The implementation of this Act, however, was a non-starter and replete with instances of non-performance. Despite various provisions, numerous instances of distress sale and alienation by different means have been reported. The cases under J&K Agrarian Reforms Act 1976 were neither properly enumerated nor contested.

Ex-parte decisions were taken, and non-migrants have been shown as prospective owners. Even in some cases, tenancy has been created by showing non-existing tenants since 1971 by way of fraud/cheating, which was not permissible under section 13 of the said Act.

It is important to mention here that since 2018-19, to 2020-21(July), the office of Relief and Rehabilitation Commissioner received approximately 113 grievances. Instances have come to notice particularly when in pursuance of the orders of the Hon’ble High Court in OWP No. 477/2016 dated 06.03.2020 titled “All India Kashmiri Samaj and Ors. V/s Union of India and Ors.” directing diarization of complaints and monitoring thereof, that immovable property of migrants has been alienated without following due process.

The government in March 2020 took the first step in the direction to address this abysmal state of affairs by doing away with the need for written complaint by the aggrieved for the competent authority to enumerate and evict unauthorised occupants. By virtue of S.O. 1229 (E) dated 31.03.2020 (Adaptation of State Laws) Order 2020, the requirement of written complaints for survey or measurement of a migrant property, proviso 2 of sub-section (2) of Section 6 has been omitted.

In order to redress the grievances of the migrants and restore the properties to their rightful owners, the Lt Governor directed further action by the department. Subsequently, a notification, S.O. 275 dated 13.08.2021 was issued whereby the powers of Commissioner under Agrarian Reforms Act, 1976 have been conferred upon the Deputy Commissioners. The involvement of senior level functionaries, exclusively for the avowed purpose under the ARA 1976, is expected to bring requisite force and focus.

Also, instructions under Section 10 of J&K Migrant Immovable Property (Preservation, Protection and Restraint on Distress Sale) Act, 1997 have been issued for preservation and protection of immovable property of the migrants, vide Government Order No. 53-JK-(Rev) of 2021 dated 13.08.2021.

The instruction provided for launching an online portal to receive complaints for correction of records/ demarcation and removal of encroachments/trespassing/alienation by way of fraud or distress sale, etc.

The instruction clearly states that any violation of the Act, including in respect of religious properties, shall be taken cognizance by the competent authority with timely action for eviction, custody and restoration of such properties and also action under law against the violators.

The revenue officers have been instructed to dispose of such cases on priority, with due consideration to the circumstances and specificity, while taking decisions with regard to the limitation period.

On the occasion, Sh. Shaleen Kabra, Principal Secretary to the Government, Revenue department and Department of DMRRR gave a brief overview about the online portal.

Mobile internet to be restored in Srinagar, Budgam today: IGP