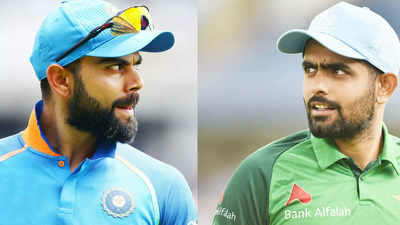 The clamour for cancellation of India vs Pakistan match in the upcoming ICC T20 World Cup is increasing amid recent killings in Jammu and Kashmir, where several civilians especially non-locals and those belonging to the minority communities have lost their lives.

Since Saturday, four non-local labourers have been shot dead in several incidents in the valley in what police claims are “terror” incidents.

Today evening, three labourers were shot at in south Kashmir’s Kulgam. Two succumbed to the injuries while the third one is being treated at a local hospital. Also read Babar says ‘will beat India’, Kohli says ‘just another game’: T20 World Cup’s biggest clash has already begun

Amid this Union Minister Giriraj Singh as per media reports has called for the cancellation of the upcoming cricket match between India and Pakistan in the T20 World Cup. The two arch rivals are facing each other on October 24.

“The match between India and Pakistan in the coming days needs to be given another thought in the wake of the attacks happening on Hindus in Jammu and Kashmir. The relations are not good right now,” the minister said as per news reports.

Twitter is also buzzing as #ban_pak_cricket trends on social media platform with many taking to the social media site to oppose the attacks on the Indian Army in Poonch and Rajouri districts of Jammu and Kashmir.

Meanwhile, Team India skipper Virat Kohli on Saturday played down the ‘hype’ surrounding the high-voltage India vs Pakistan match as “another game of cricket” for him.

“I honestly never felt so,” Kohli said when asked if it feels different whenever India meets its neighbouring country.

Notably, India and Pakistan are scheduled to clash in the most-anticipated contest of the showpiece event on October 24.

Pakistan has a dismal record against India in ICC tournaments with the men in green only winning 3 out of the 17 matches, and all three victories came in Champions Trophy matches.

This is noteworthy that the last time Pakistan beat India was in the 2017 ICC Champions Trophy final.