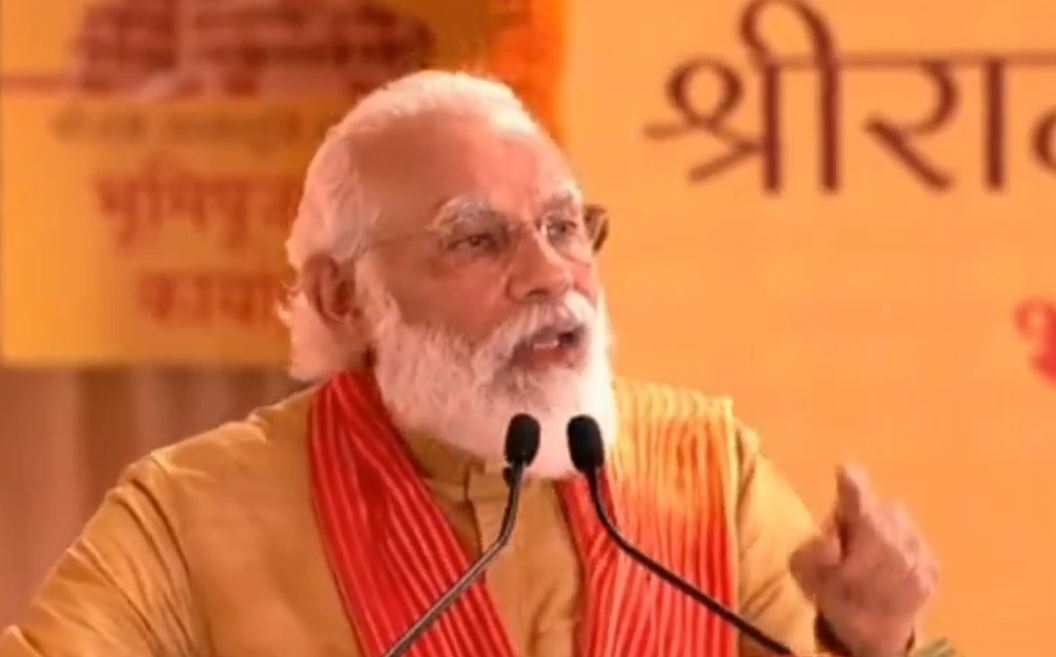 He said: “Kanyakumari to Kheer Bhawani, Koteshwar to Kamakhya, Jagannath to Kedarnath, Somnath to Kashi Vishwanath, Lakshadweep to Leh, all is immersed in Lord Ram.”

“Every heart is illuminated; it is an emotional moment for the entire country… A long wait ends today,” said the Prime Minister.

He said that a grand temple will now be built for Ram Lalla deity who had been living under a tent for many years.

He added that given the raging pandemic, a “maryada” has been kept in mind during the “Bhumi Pujan”. Earlier, Sangh Chief Mohan Bhagwat also said that the invitation could not be extended to many considering the CIOVID-19 pandemic.

“The ‘Jai Siyaram’ call is resonating not only in the city of Lord Ram today, but throughout the world. I express my gratitude to all citizens of this nation, Indian diaspora across the world and all the devotees of Lord Ram on today’s pious occasion,” he said.

He also referred to the fact how holy soil and water from across india reached Ram Janmabhoomi for ‘Bhumi Pujan’ ceremony.

The Prime Minister said Ram is in India’s history and philosophy. In a significant statement, he used Ram to portray a “unity in diversity” of India, which he says is present in different forms in different areas of India.

The Prime Minister dressed in traditional attire (dhoti and kurta), earlier bowed in front of the deity Ram Lalla. Amid Shankhnaad, the PM offered his prayers to the deity after which he took part in an elaborate ‘Bhoomi Pujan’. (IANS inputs)