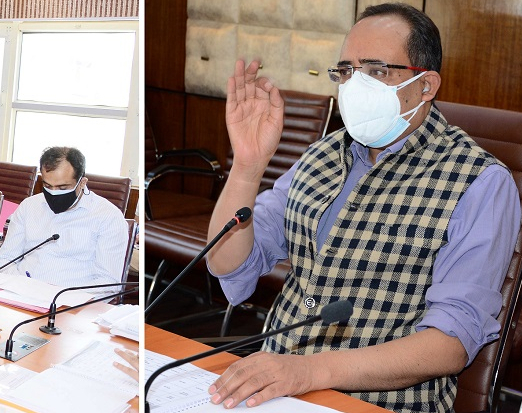 The Principal Secretary reviewed district-wise and circle-wise financial and physical status of the ongoing works under different CSS being executed by different agencies in various districts and circles of the Union Territory.

At the outset, Chief Engineer Projects gave a detailed presentation about the status of projects with respect of targets and achievements of the works being executed through different agencies under Deen Dayal Upadhyaya Gram Jyoti Yojana, (DDUGY), PMDP, RAPDRP, RGGVY, IPDS and other schemes undertaken in PDD sector in Jammu and Kashmir.

The Principal Secretary was informed that for distribution projects being executed circle-wise and district-wise under CSS Rs. 1576.96 crores have been sanctioned for rural system strengthening projects while Rs. 1538.98 crores have been sanctioned for projects in urban areas. These include projects under Flagship CSS such as DDUGJY and IPDS and also special support to J&K under the Prime Minister’s Development Programme (PMDP). These projects include creation of substations, augmentation of existing stations as well as strengthening of other infrastructure, new HT lines, AB cabling and other improvements.

While reviewing the progress of works, the Principal Secretary noted that despite the limitations caused by COVID, the department had not allowed the pace of development to flounder and nearly half of the projects were set for completion between September and December this year.

While complimenting the staff for their efforts, he exhorted them to make up for the time lost during the lockdown and ensure that the projects were completed and put to use as early as possible. On the issue of handover-takeover of Completed Towns under IPDS/PMDP, the Principal Secretary impressed upon the concerned officers to pace-up the handover/takeover process of the completed projects. He observed that the benefits of improved infrastructure would be enjoyed by the people only after the same had been integrated into the existing system and charged.

On the issue of RoW, the Principal Secretary directed the implementing agencies to prepare a list of RoWs to be submitted to MD KPDCL who would take up the RoW issue with the concerned officers of the areas for resolution of this pending issue.

Speaking on the occasion, Kansal directed the officers to continuously monitor and redress all pending issues which include compensation for land, forest clearances, cutting tress or any other issue and should be duly reflected in CAPEX Budget.

The officers were directed that all the UCs must be updated and be submitted on time with the Government of India besides ensuring compliances in maintain of accounts, timely audits and other reports.

Under the Street Lighting Project taken under PMDP, the meeting was also informed that 24 works have been taken up at an estimated cost of Rs 21 crore and upgradation of electrical infrastructure at Shrines in Urban areas /Towns sanctioned under PMDP-Urban/Rural an amount of Rs 1392 lakh sanctioned for 29 shrines, of which 24 shrines have been completed.

The meeting also discussed the replacement of barbed wire and wooden poles.

To this, Principal Secretary reiterated that the Government of India has already sanctioned 100 percent replacement for these works and requisite DPRs should be submitted to GoI in this regard.

He said that each human life is valuable and needs to be safeguarded at every cost.
While appreciating the work done so far, the Principal Secretary assured all possible support and assistance to the executing agencies from UT government’s side and asked them to pull-up their socks to achieve the set targets within the given time limits.

20th hike in petrol prices in a month; above Rs 100 in six states now