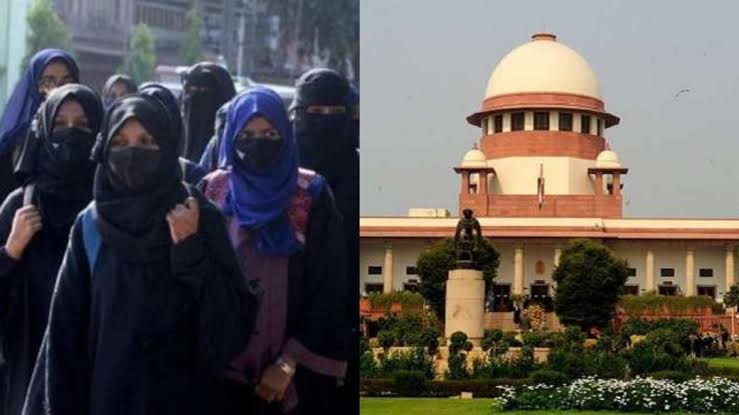 New Delhi: Supreme Court has agreed to set up a bench to consider a batch of pleas against the Karnataka High Court judgment upholding the right of educational institutions to ban hijab in pre-university colleges in the state.

As counsel mentioned the matter before a bench headed by Chief Justice N.V. Ramana, he said: “I will constitute a bench. One of the judges is not well.” Counsel urged the top court to fix a date in the matter, as petitions against the high court judgment were filed in March.

On July 13, advocate Prashant Bhushan mentioned the matter before a bench headed by Chief Justice Ramana, saying the petitions have not been listed for a long time. “The girls are losing out on their studies. This matter was filed long back,” he said.

The Chief Justice replied that it will be listed sometime next week. Bhushan mentioned the matter on behalf of the appellants who have challenged the high court verdict in the top court.

On March 24, the Supreme Court declined to give any specific date to hear a plea challenging the Karnataka High Court order, which dismissed all petitions seeking direction for permission to wear hijab in classrooms.

Senior advocate Devadutt Kamat mentioned one of the cases on behalf of a petitioner, a Muslim girl student, and sought urgent listing of the matter. He insisted that exams are approaching and urged the court to hold an urgent hearing on the matter.

A bench headed by Chief Justice Ramana, however, said this had nothing to do with exams, and told Kamat not to sensationalize the matter. Kamat contended that the girl students are not being allowed to enter the schools, and they will lose one year. However, the bench moved on to the next item.

On March 16, the Supreme Court declined to grant an urgent hearing on a plea challenging the high court order, which held that the wearing of hijab by Muslim women does not form a part of essential religious practice in the Islamic faith.