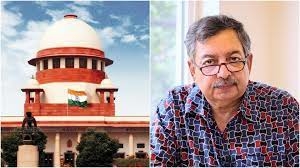 The Supreme Court on Thursday quashed a sedition case against veteran scribe Vinod Dua for his alleged comments against Prime Minister Narendra Modi in his YouTube show last year, saying a 1962 verdict entitles every journalist to protection.

A bench comprising Justices U U Lalit and Vineet Saran, however, declined the prayer of Dua that no FIR should be registered against any media personnel with 10 years’ experience unless cleared by a committee, saying it would amount to an encroachment into the domain of the executive.

On the issue of protection of freedom of speech and expression of media personnel, it said, “Every journalist is entitled to protection under the Kedar Nath Singh judgment (the famous verdict of 1962 on the scope and ambit of offence of sedition in the IPC).” While upholding validity of section 124A (sedition) of the IPC, the top court in 1962 had ruled the sedition charges could not be invoked against a citizen for criticism of government actions as it would be in conformity with the freedom of speech and expression.

The bench on October 6 last year had reserved the verdict on the petition after hearing arguments for Dua, the Himachal Pradesh government and the complainant, a local BJP leader, in the case.

On July 20 last year, the top court had extended till further orders the protection granted to Dua from any coercive action in the case.

The top court had earlier said that Dua need not answer any other supplementary questions asked by the Himachal Pradesh police in connection with the case.

An FIR against Dua under provisions of the Indian Penal Code for alleged offences of sedition, public nuisance, printing defamatory materials and public mischief was lodged by BJP leader Shyam at Kumarsain police station in Shimla district on May 6 last year and the journalist was asked to join the probe.

Shyam has alleged that Dua, in his YouTube show, had made certain allegations against the prime minister.

Earlier, in an unprecedented hearing conducted on a Sunday on June 14 last year, the top court had granted protection from arrest to Dua till further orders. However, it had refused to stay the ongoing probe against him.

Besides seeking quashing of the FIR, Dua, in the plea, has sought ”exemplary damages” for ”harassment”.

He has also sought direction from the apex court that ”henceforth FIRs against persons belonging to the media with at least 10 years’ standing be not registered unless cleared by a committee to be constituted by every state government, the composition of which should comprise of the Chief Justice of the High Court or a judge designated by him, the leader of the Opposition and the Home Minister of the State.” Dua has said freedom of the press is a fundamental right guaranteed under Article 19(1)(a) of the Constitution.

The plea has said the top court has been ”emphasising for distancing the police from the ruling party in the state” but ”none of the major political parties which are in power in various states are ready to give up their control over the police”.

”There is a recent trend against the media where state governments which do not find a particular telecast to be in sync with their political ideologies register FIRs against persons of the media primarily to harass them and to intimidate them so that they succumb to the line of the state or else face the music at the hands of the police,” the plea has claimed.

It claimed there is a concerted approach of authorities ”to silence the media which is not palatable to them”.

It alleged that the FIR registered against Dua is ”politically motivated” and is ”purely to settle scores for critically evaluating the functioning of the central government at the present time of Covid”.