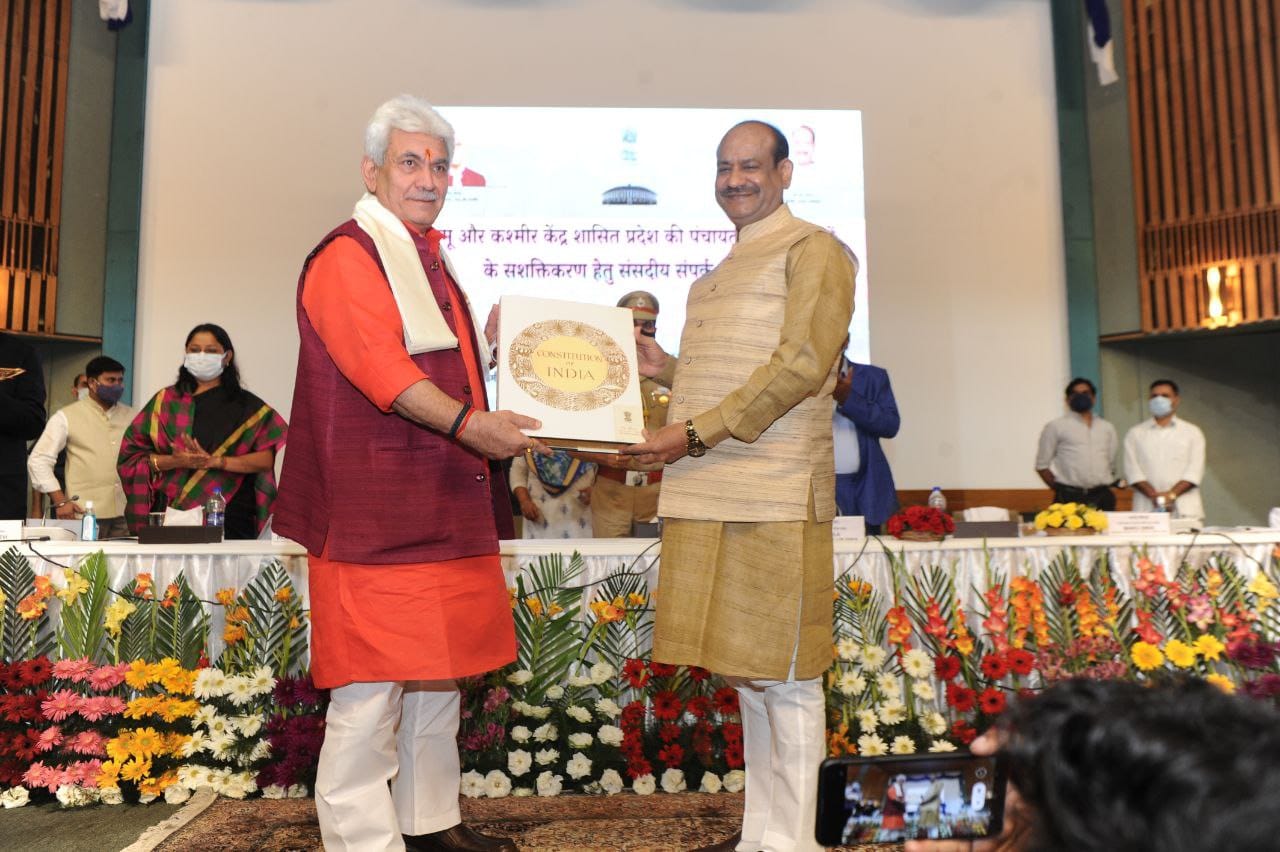 Outlining that the objective of the Outreach Programme is to make our democratic institutions at the grass-root level stronger and more transparent and accountable, Shri Birla said that democratic institutions like Gram Panchayats can make people’s lives better and for that collective and coordinated efforts are needed at the ground level.  ‘Empowered Panchayats will make our democracy stronger’, and will increase confidence of the people at large, he said.

Shri Birla also referred to the ongoing AzadikaAmritMahotsav events and said that democracy in India has been strengthened over the period of time. He noted with satisfaction that hopes and aspirations of the people have been fulfilled to a large extent and now India is leading the world community in the journey of democracy.  Shri Birla also said that it is democracy which connects our diversities and makes us a collective force. He stressed that our collective force can help us to overcome the adversities that impede our progress.

Shri Birla lauded the developments in Union Territory of Jammu and Kashmir and said that the UT is on the path of peace, progress and development. The Speaker observed that collective and coordinated efforts by democratic institutions at the grass-root level would take the fruits of development to the last man standing in the row. He emphasized that  democratic institutions need to fulfill their responsibilities as agents of development to make the country, including the UT of Jammu & Kashmir, Aatmanirbhar.  He further said that Jammu and Kashmir has the potential and skill in the fields of tourism, handicrafts and agri-products and grass root level democratic institutions should work in the direction of providing a marketing platform to them at the national and international level. He hoped that Jammu and Kashmir would lead the country in development and employment.

On this occasion, he also assured that elaborate arrangements would be made by Lok Sabha Secretariat for capacity-building programmes for representatives of Panchayati Raj Institutions in the Union Territory. He hoped that properly trained representatives would be able to work professionally which would ultimately make a qualitative change in the lives of the people. Shri Birla further informed that he would suggest to the Parliamentary Standing Committees to undertake regular Study Visits to the far flung areas of the UTs of Jammu and Kashmir and Ladakh to understand the ground realities and possible solutions for mitigation of greviances of the local people.

Suggesting that development should start from the bottom as advocated by Mahatma Gandhi at the time of Independence, Shri Birla appealed for active participation of the people in democratic institutions and democratic processes. He felt that elections to local bodies in Jammu and Kashmir have strengthened our democracy and this process would ultimately help the people.

Birla also said that formulation of SoPs for democratic institutions is the need of the hour to facilitate the smooth conduct of their proceedings. He appealed to the democratic institutions working at the grass-root level in Jammu and Kashmir to devise their rules and procedures for structured functioning and fulfillment of people’s hopes and aspirations. He was of the firm opinion that the process of development will get a fresh momentum if these institutions work properly and adopt the best practices.

Speaking on this occasion, Union Minister of State for the Ministries of Jal Shakti and Food Processing Industries Prahlad Singh Patel referred to various government schemes like Pradhan MantriAwasYojana, Jal Jeevan Mission and Pradhan MantriUjjwalaYojana that have reached the intended beneficiaries in the recent past.  He said that in democracy, Panchayats have a significant role in channelizing of the fruits of development at the grass-root level. Shri Patel also said that government schemes, which have been overseen by the representatives of local bodies, have improved the way of life of the people of Jammu and Kashmir.

Lieutenant Governor of Jammu and Kashmir, Manoj Sinha said that Gram Panchayats and PRIs are at the heart of our development process and they can provide good governance at the grass-root level.  Referring to the 73rd and 74th constitutional amendments, he hailed the implementation of the three tier Panchayati Raj system in Jammu and Kashmir.  Shri Sinha also said also said that enhanced budgetary support to the PRIs in Jammu and Kashmir is ensuring rapid development of the Union Territory. He also called for improving transparency and accountability of democratic institutions and use of technology in this regard.  By 2024, all the households in Jammu and Kashmir will be provided 24×7 electricity, said Shri Sinha.

Dr. Farooq Abdullah, Member of Parliament from Srinagar said that Panchayati Raj Institutions are the foundation stone of our democracy and called for providing more resources to these institutions and transparency in implementation of works at the Panchayat level. He exhorted the representatives of these bodies to work honestly and serve the people in all possible ways. He also recalled several attempts made in the past to implement the three tier system in Jammu and Kashmir and hoped that newly elected representatives would win the trust of the people, in times to come.

Earlier, welcoming Lok Sabha Speaker Om Birla,  Shri Nirmal Kumar Singh,  former Deputy Chief Minister of Jammu and Kashmir, appreciated the initiative of the Lok Sabha Speaker in involving the highest institution of our democracy in strengthening local bodies at the grass-root level.  Shri Singh said that the visit of Shri Birla is a milestone in the journey of democratic institution building in Jammu and Kashmir.

Later, three panel discussions were held  on (i) Indian Parliament and Grass Root level Institutions: Potential and Challenges – Stepping stone towards leadership,  (ii) Leadership of Panchayat: Social Change, Economic Development and Empowerment of women in rural areas, and (iii)  Role of Panchayats on promotion of Tourism, Culture and Handicrafts in Jammu & Kashmir. During these panel discussions, the delegates shared their experiences and ideas to fine tune their work in their respective areas.