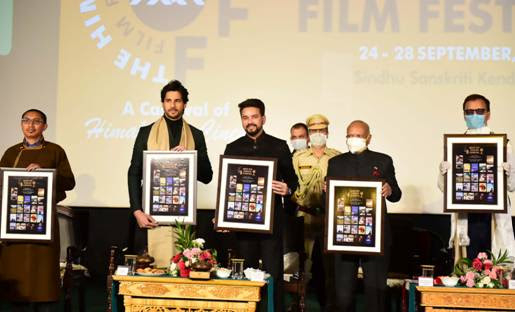 The five-day film festival is a part of the celebrations of ‘Azadi Ka Amrit Mahotsav’ commemorating 75 years of India’s Independence. Keeping in view the PM’s call for ‘Jan Bhagidhari’, the film festival will have active participation from the local filmmakers and will showcase talent across 12 Himalayan states and UTs.

Addressing the audience at the ceremony, the Minister said the current Narendra Modi Government will give a new identity to the hill States and the Minister and Ministry of Information and Broadcasting will work relentlessly towards that goal.

The Minister added that the Himalayan States have a diverse culture and have a lot to showcase. The youth of these States need opportunities to display their talent. Cinemas provide a platform to bring all cultural diversities together. The world of cinema provides a prominent platform for the culture of the country.

Speaking about the valor of the people of Ladakh, the Minister said the people of the region stand shoulder to shoulder with our brave soldiers in the protection of our borders. Movies like Shershaah remind many generations of the valor of our soldiers who fought bravely in the wars. Such movies are a great contribution that will inspire generations to come.

Speaking on the rising charm of OTT, he said that India is a country where the popularity of OTT platforms is increasing. This presents an opportunity, not just for the big states but even the smaller States of the country and soon Ladakh is going to find recognition even in international film festivals in the future.

Highlight the popularity of good content on OTT platforms, the Minister said that India is the fastest-growing OTT market and it is the content that is drawing people to the OTT platforms. The power lies in content and India can become the subcontinent of content creation of the world. But we need to groom our people to produce that quality content. Post-production work for many international blockbusters was done in India and the sector along with the gaming and visual graphics sector provides an immense space for growth.

Thakur said that there has been a persistent demand that Jammu and Kashmir and Ladakh be connected with a film training institute.

He subsequently announced that this idea will be implemented soon.

‘Shershaah’, the biographical war movie based on ‘Param Vir Chakra’ awardee Captain Vikram Batra was also screened during the opening ceremony in presence of its Director Vishnuvardhan and the lead actor Sidharth Malhotra.