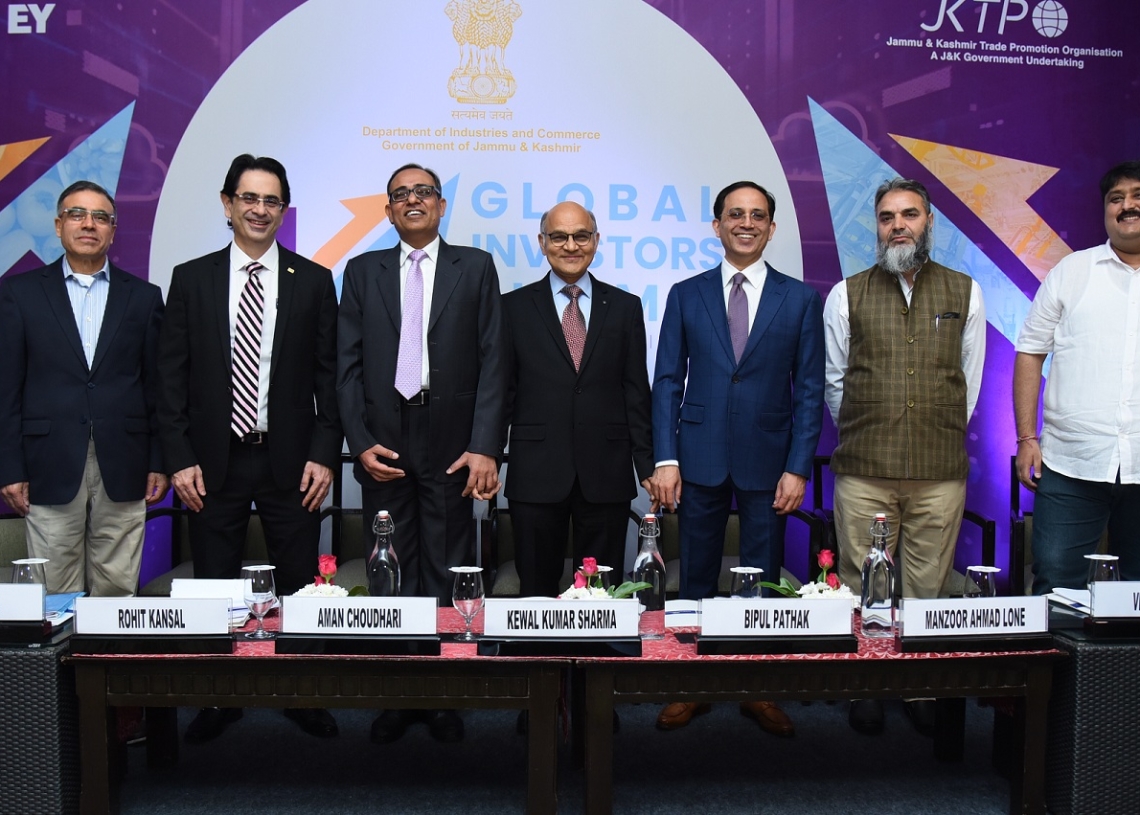 Around 54 top officers have been deputed to interact with business houses and convince them to sign Memorandum of Understanding (MoU) with the government.

On Monday, the government began road shows in Bengaluru and Kolkata as succeeding event to the grand curtain raiser heralding the J&K Government’s first Investors’ Summit.

The road shows are aimed to allow prospective investors have a dialogue on the immense investment opportunities presented by the verdant region.

In Kolkata, Advisor to Governor, Kewal Kumar Sharma was at the forefront of the road show where many local corporate houses interacted with officials to enquire about scope of investment in J&K.

Speaking on the occasion, Sharma emphasised that “A new version of J&K – J&K 2.0 is all set to emerge as the UT is now at par with rest of India.”  He further remarked that every district of Jammu and Kashmir has a distinct heritage, culture & history and huge untapped potential.

“Today we conducted programmes in Kolkata where 140 people participated. They were positive about investing in Jammu and Kashmir,” he said.

Kumar said the officials are meeting corporate houses to instill confidence and encourage them to pledge investment in the UT. “First an invitation is being sent to the corporate houses. Later we hold one-to-one meeting with them,” he said.

The government has created a MoU to liaison with investors interesting to invest in Jammu and Kashmir.  “A nodal officer is deputed in MoU cell who oversees the entire process of dealing with the interesting Corporates,” he said.

Kumar said most of the investors have shown interest in investing in Education and Tourism sector.

“The administration informed the investors about incentives and prospectus of their business in the newly declared Union Territory,” they said.

Rohit Kansal, Principal Secretary, Planning Development and Monitoring Department made a detailed presentation on investment opportunities in J&K; he highlighted 14 distinct sectors including tourism, education, healthcare and infrastructure which presented the greatest opportunities for potential investors.

He also made a reference to the investor friendly policies and sector specific policies. He elaborated that with an aim to make Jammu and Kashmir an industrial hub more than 48 investible projects and new 14 focus sector have been identified, which are investor-friendly and easy to business. 6000 + Acres of industrial and sector-specific land bank has been identified to attract large, mega and small industries to create more employment opportunities in the newly formed UT.

The Presentation was followed by film on UT of J&K and a presentation on IT Sector by Simrandeep Singh, MD JK ITIDC.

“We are coming up with two IT parks with plug and play facility and are also in process of finalizing our new industrial promotion policy,” informed  Bipul Pathak, Principal Secretary – IT, J&K. He also highlighted that there are immense opportunities for skilled manpower in the UT and the government is offering productive incentives and relaxations in several industry sectors.

“The Union Territory of J&K is one of the best destinations in the country for setting up residential schools, smart schools, skill centres,” opined  Hirdesh Kumar, Commissioner Secretary, School Education who led the Road show held  at Kolkata for the upcoming Jammu and Kashmir Global Investors’ Summit.

“We are confident that such steps coupled with the Central Governments and UT Administration’s efforts to restore normalcy in J&K will soon create an environment for attracting industry to the UT,” said Sandipan Chakravortty, Past Chairman, CII Eastern Region while addressing the gathering.

During Road show at Kolkata a detailed presentation was made by Ravinder Kumar, MD, JKTPO, which highlighted all the 14 Focus sectors and initiatives taken by Government to improve industrial ecosystem in UT. It was followed by UT J&K film and presentation on Tourism Sector by Zubair Ahmad, Administrative Secretary, Tourism. Also prominent industrialists Gagan Jain, Director VKC Nuts Pvt Ltd were present during the sessions.

These parallel road-shows consist of a series of round-table discussions and networking opportunities including G2B, B2G and B2B meetings, all conducted via strategic sector-specific sessions to maximise industrial growth and employment opportunities. The event was attended by 245 delegates and 33 B2G meetings were held. 34 no of MoU with total worth of 2847 crores were signed during both parallel road shows.

Kashmir Inc. however said the government should ease off the stress of local business houses before inviting outsiders to invest in J&K.

“Calling investors is a good decision but practically condition of local businessmen is very bad.  Our losses have piled up to more than Rs 20,000 crores and the situation on ground is not feasible for business,” said Nasir Hamid Khan, senior vice president KCCI.

Traders from Jammu division on the other hand are riding high on government’s initiative, claiming it will generate employment.